When the former Michigan State star received a guaranteed three-year, $84 million contract, it was believed Minnesota was an immediate Super Bowl contender. 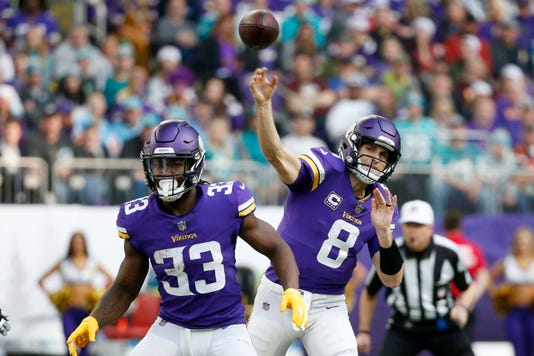 Allen Park — The year hasn’t gone as planned for the Detroit Lions, but, to a different degree, the same could be said for Sunday’s opponent, the Minnesota Vikings.

These Vikings were supposed to be Super Bowl contenders. They weren’t all that far off a year ago, falling to eventual champion Philadelphia in the NFC championship game.

To get over the hump, the team made one of the offseason’s boldest moves, signing free agent quarterback Kirk Cousins (Michigan State) to what was at the time the richest contract in NFL history, a three-year, $84 million pact. The deal further turned heads because it was fully guaranteed.

With an impressive defense essentially returning all its key pieces, one of the NFL’s best receiving duos in Stefon Diggs and Adam Thielen, running back Dalvin Cook coming back from injury, Cousins appeared to be the plug-and-play upgrade the Vikings needed to reach the next level.

Vegas was certainly buying. The earliest odds, posted the day after the Super Bowl, had the Vikings as 16-1 to win the Super Bowl LIII. The addition of Cousins moved that line to 9-1.

But Minnesota has never gotten on track this year. After a season-opening win over San Francisco, the team went nearly a month without a win, including a disheartening blowout loss at home to Buffalo. Against top competition, the Vikings have fallen short all year, dropping all five games to teams on track to qualify for the postseason.

That’s certainly not all on Cousins. Minnesota’s vaunted defense has battled a number of injuries this year, and defensive end Everson Griffen missed a month to deal with a mental health issue. Still, the quarterback’s inability to put the team on his shoulders during that time also validated why Washington, the team that drafted him in 2012, was always reluctant to give him the long-term deal he thought he deserved and eventually got from Minnesota.

Statistically, Cousins has been the same quarterback in Minnesota he was in Washington. He’s highly accurate, completing a career-high 70.5 percent of his throws with a passer rating hovering around 100.

“We’ve kind of seen him since through tape and things like that, I think he does a really good job of his decision-making,” Lions coach Matt Patricia said. “I think he’s a really smart quarterback that obviously understands the scheme and the system, and the best thing he’s doing is getting the ball to his go-to guys.”

But Cousins has also been prone to his fair share of errors. He’s thrown 10 interceptions and lost three fumbles. And things aren’t trending positively down the stretch. He’s thrown seven picks the past seven games, including one returned for a touchdown in last week’s victory over Miami.

By most measures, Cousins is middle of the road at his position. ESPN’s QBR metric ranks him 15th this season, while Pro Football Focus grades him 14th at the position.

In fact, the Vikings are at their best when they don’t have to rely on Cousins. In games where he’s attempted more than 40 passes, the team is 0-5-1. In games he’s thrown 40 or fewer, 7-1. That explains why the team made a switch at offensive coordinator this month, with a focus to put more emphasis on the ground game.

Cousins might be paid in the same stratosphere, but he’s not on the same level as an Aaron Rodgers or Drew Brees. Ask around the Lions’ locker room and defensive players can’t come up with enough superlatives to describe those elite-tier passers. Ask what makes Cousins good and the response is more muted.

“I don’t know,” safety Glover Quin said. “Obviously, this is a professional business. If the organization felt high enough (on him) to give him $84 million guaranteed, he can obviously throw the ball. He can obviously do something. I don’t think they mistakenly, casually hand out that kind of money. I’m pretty sure he can make throws.”

Cousins completed 18 of 22 throws against Detroit the last time the teams met, but he also finished with a season-low 164 yards. And that played into something else Quin said about Cousins, complimenting the veteran’s ability to manage the game and emerge with wins more often than not.

Of course, that margin has been narrow Cousins’ first season in Minnesota. The Vikings are 7-6-1 and clinging to the final playoff spot in the NFC with a game against the Bears looming to close the year. The Lions, with their own postseason hopes dashed, will get a crack at playing spoiler a week earlier, to share their holiday disappointment with a division rival.