Gase, 40, who attended Marshall High School and Michigan State, went 23-26 with the Dolphins, and a 42-17 loss Sunday at Buffalo sealed his fate. 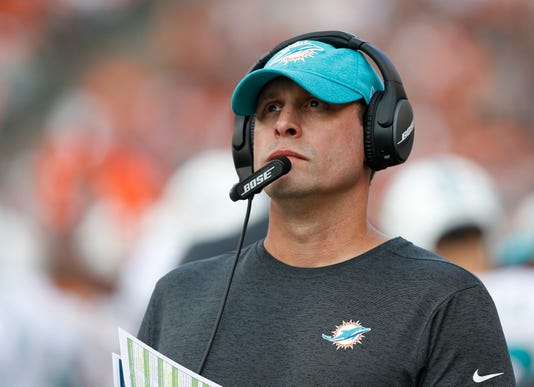 Adam Gase was fired Monday as part of the latest organization shake-up after the Dolphins finished 7-9 and missed the playoffs for the 15th time in 17 years. Owner Stephen Ross ordered a roster overhaul and acknowledged it may take several seasons to build a winner.

Ross demoted executive vice president of football operations Mike Tannenbaum. General manager Chris Grier, who has been with the team in various capacities for 19 seasons, was given more authority and will oversee football operations while reporting directly to Ross.

The team said it will immediately conduct a search for Gase’s successor, who will report to Grier under the team’s new, more streamlined leadership structure.

The next coach will be the Dolphins’ 10th since 2004, including three interim coaches. This time, Ross said, will be different.

“Today we’re no further along than when I bought the team,” said Ross, the mega-Michigan donor who became majority owner a decade ago. “I thought it was time for the organization to take a different approach.”

Ross, 78, said he’s willing to be patient because the Dolphins’ win-now philosophy hasn’t worked, and he wants a longer-term view regarding player personnel decisions.

In the past the Dolphins counted on free agents to get over the hump and instead became stuck on a treadmill of mediocrity. They’ve finished with six to eight wins in nine of the past 10 seasons, and haven’t won a playoff game since 2000.

“To keep operating under that philosophy would be like the definition of insanity: doing the same thing and expecting a different result,” Ross said. “What I want is sustained winning seasons. That’s what the fans want and deserve. We’re going to build this organization based on our needs, and if it takes a year or so, two years, three years, we’re going to be there.”

The approach makes sense given the Dolphins are likely starting over at quarterback . Ryan Tannehill has been with Miami since 2012 but has never taken a postseason snap, and he’s widely expected to be traded or released because of an escalating salary.

Gase, a Marshall High School and Michigan State alum, went 23-26 with Miami , including a playoff game in 2016. After the 2018 Dolphins beat New England on the play of the season — a pass and double lateral for a touchdown as time ran out — they were outscored 100-41 in their final three games by other also-ran teams, including a 42-17 loss at Buffalo on Sunday that sealed Gase’s fate.

“Probably one of the toughest decisions I’ve made,” Ross said. “He worked his tail off, and unfortunately things didn’t go the way we all hoped.”

Tannenbaum, who held his job for four years and was involved with several disappointing drafts, was reassigned within the organization.

Grier, the GM for the past three seasons, said the team will “investigate every avenue” in pursuing a coach, and said NFL experience wasn’t a necessity. Grier said he’s committed to Ross’ new, more patient approach in building a winner.

“It’s knowing who you want to be,” Grier said. “You have a vision for what your team wants to be, and you stay with it.”

There’s already speculation Gase, 40, will be coaching another team in 2019, and his supporters argue he overachieved this season, given the quality of the Dolphins’ roster.

They were outgained by 1,619 yards, worst in franchise history, and outscored by 114 points. They ranked 31st in the NFL in offense, also a franchise worst, and 29th in defense, allowing a franchise-record 6,257 yards.

Gase went 7-1 in one-score games, and 20-6 in three seasons. But his record in games decided by more than one score was 3-20, including 0-8 this season. His teams struggled especially on the road, losing their final seven away games this year while being outscored 248-117.

Gase, who was on the Lions staff from 2003-07, was seen as a rising young star coach when the Dolphins hired him, and even more so after they went 10-6 in his first season and made the playoffs for the only time since 2008.

But they regressed to 6-10 in 2017, when Tannehill missed the entire season following knee surgery. And the poor finish this season raised questions about whether Gase had lost the support of some players.

News of his firing was applauded by at least a couple of Dolphins discards. Cleveland Browns receiver Jarvis Landry tweeted emojis laughing so hard they cried. Buffalo Bills defensive tackle Jordan Phillips did the same and added, “YESSSSSSSSSSSSSSSSSSSSSS!!!!!!!!!!!!!!!” 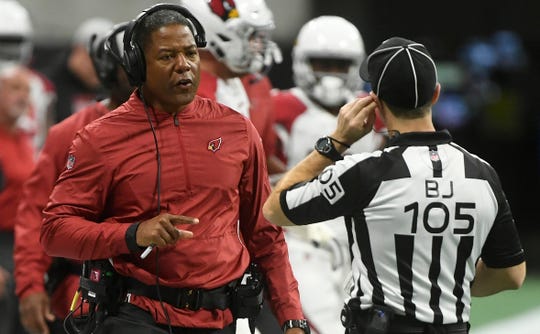 Cardinals fire Wilks after one year

The Arizona Cardinals have fired Steve Wilks after just one season as head coach.

Wilks’ firing Monday followed a 3-13 season, the franchise’s worst record in 18 years and the worst in the NFL this season.

Wilks, 49, was hired after Bruce Arians retired following five seasons in Arizona. It was a dramatic shift in styles.

Arians was known for his flamboyant personality and dynamic offense. The low-keyed Wilks came to the job with an entire coaching resume on defense.

He was defensive backs coach at Carolina for five seasons before being promoted to defensive coordinator by Panthers coach Ron Rivera for the 2017 season.

The Cardinals zeroed in on Wilks as Arians’ successor.

“In our research, they talked about what a passionate coach (Wilks) is on the field and what a terrific leader he is,” team President Michael Bidwill said at the news conference announcing the hiring. “Players love playing for him.”

Wilks said then that “this is not really a rebuild, this is a retool. We have the culture of winning here. We just have to be able to sustain it.”

Wilks wanted to build a team centered on toughness up front and a power running game. But things fell apart quickly. The offensive line struggled even before it was decimated by injuries and the defense was susceptible to big plays.

Injuries continued to accumulate. On the offensive line, only rookie center Mason Cole made it through the season.

Arizona lost nine games by double digits, four by 20 points or more. The Cardinals were 1-7 at home, their worst record there since moving to Arizona.

The team’s offense finished last in the league, where it had been all season. 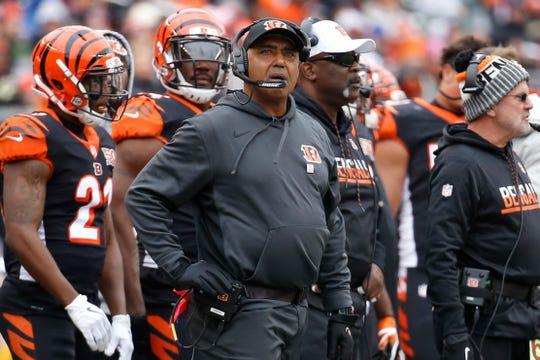 The Bengals fired coach Marvin Lewis on Monday, ending a 16-year stay in Cincinnati that included seven playoff appearances without so much as one win.

The move ends the second-longest head coaching tenure in the league. New England’s Bill Belichick is wrapping up his 19th season with another postseason berth. He’s won five Super Bowls and made eight appearances in the title game, both NFL records.

Lewis leaves Cincinnati with a postseason record of 0-7, the worst in NFL history. The Bengals haven’t won a playoff game since the 1990 season, tied with Washington for the fifth-longest futility in league history.

A third straight losing season punctuated by plummeting attendance prompted change-resistant Mike Brown to finally cut ties with Lewis, whose loyalty and close working relationship with the owner brought him repeated contract extensions even as the playoff losses piled up.

They described their parting Monday as a mutual decision.

The Bengals (6-10) lost in Pittsburgh 16-13 on Sunday and finished last in the AFC North for only the second time under Lewis. Attendance at Paul Brown Stadium has fallen to the second lowest in the league, ahead of only the Los Angeles Chargers, who are playing in a small, temporary stadium.

“I didn’t deliver what the No. 1 goal is, and that’s to be world champions, and we did not get that done,” Lewis said at a news conference. “A lot of positives, but that’s the one goal as a coach you look forward to doing. Mike and I both decided it’s time. I think it’s a tough moment for both of us, but we both realized.”

“Personally, I am very fond of Marvin and will miss working with him,” Brown said in a statement. “He is a friend and a colleague, and I thank him for what he has meant to this franchise. But it is time to turn the page and look toward the next chapter for our organization, and we are excited about what the future holds for the team and our fans.”

The surprise wasn’t that he was fired, but that he lasted so long.

Lewis was a rare hire from outside the organization when Brown brought him aboard in 2003, three years after he helped Baltimore win a Super Bowl with a record-setting defense. The Bengals set club records for defensive futility this season, with Lewis taking over the job as coordinator at midseason when Teryl Austin was fired. The defense improved, though not enough to make a difference as the Bengals squandered a 4-1 start with nine losses in the last 11 games. 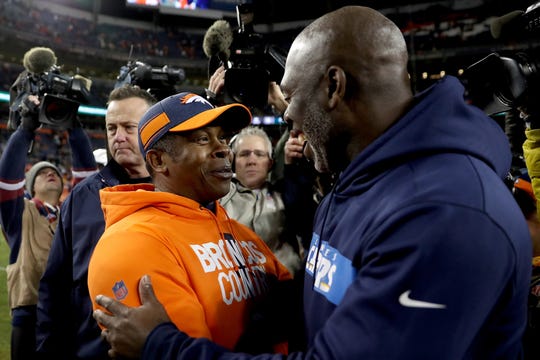 Vance Joseph was fired as coach of the Denver Broncos on Monday after back-to-back double-digit losing seasons.

Joseph met with general manager John Elway after completing a 6-10 season and was dismissed with two years and about $6 million left on his contract.

“I spoke with Vance this morning and thanked him for all of his hard work as our head coach. Although we decided to make this change, I believe Vance is a good football coach who has a bright future in this league,” Elway said in a statement ahead of his news conference scheduled for later Monday.

“Vance made a lot of strides and deserves credit for how hard and competitively the team played this season. There’s always going to be a high standard here – the bottom line is we need to win more football games. We’re excited about the foundation that’s being built and look forward to putting in the work to get the Broncos back on the winning track.”

Despite that foundation, the Broncos’ job isn’t what it was just two years ago when Joseph replaced Gary Kubiak, who stepped down a year after leading Denver to the Super Bowl 50 championship.

The Broncos are now mired in a three-year playoff drought. There’s a family feud as the Bowlens publicly haggle over the future of the franchise. Joseph never was fully empowered to run the football team as Elway dictated many of the assistants that were hired. And the team hasn’t had a title sponsor on its stadium for several seasons.

Joseph acknowledged after the Broncos’ 23-9 loss to the Los Angeles Chargers on Sunday in which there were more than 12,000 no-shows at Mile High Stadium that an 11-21 record wasn’t good enough by Broncos standards.