It’s only mid-March and Cleveland’s in a full-blown football frenzy. Expectations for the upcoming season, which were already enormous before the team traded for Beckham, have spun out of control. 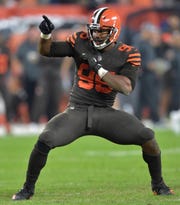 Fans are scrambling to get their hands on tickets, jerseys and make their first Odell Beckham Jr. sighting.

It’s only mid-March and Cleveland’s in a full-blown football frenzy. Expectations for the upcoming season, which were already enormous before the team traded for Beckham, have spun out of control.

Browns general John Dorsey’s trying to rein them in.

“Expectations, I hear a lot about that, but I know this — good football teams, they win in the fall,” Dorsey said Thursday, a day after the Browns officially landed Beckham in a franchise-changing trade from the New York Giants. “What we have done is we have added some talent. Now, the chemistry part has to take over with it.

“Teams win in the fall. They do not win in March, and that is good teams.”

He’s constructed a pretty good one as well — at least on paper.

Dorsey, who has transformed the Browns from winless to contenders in just more than a year, figured to make some moves during the offseason to upgrade his roster. However, when he recently said at the combine that he wasn’t prepared to “go for it” it appeared he would wait until the draft to add talent.

That changed with his stunning acquisition of Beckham, one of the NFL’s biggest stars, along with Pro Bowl edge rusher Olivier Vernon in a trade from New York as well as signing defensive tackle Sheldon Richardson to a three-year, $36 million free agent contract. Dorsey also made several other moves designed to plug holes.

At 6-foot-4, 225 pounds the former Michigan star gives Andrew Luck a bigger receiver than he’s worked with in the past. In 2017 he caught 63 passes for 840 yards and eight touchdowns, and could emerge as the perfect complement to three Pro Bowl pass-catchers already on the roster: receiver T.Y. Hilton and tight ends Eric Ebron (a former Lion) and Jack Doyle.

Last year Funchess regressed. He had 44 receptions for 549 yards and four TDs and reinforced his reputation for drops. So Ballard reportedly gave Funchess a $10 million deal that could go up to as much as $13 million.

“I think the Colts are a great fit and I think they’re ready to take that next step,” Funchess said in a conference call. “I think if we win the Super Bowl, everything will take care of itself.”

Donte Moncrief can do the math in his head. Yet the newest Pittsburgh Steelers wide receiver has no plans to fill the void left by Antonio Brown.

“AB is one of the best if not the best ever,” Moncrief said hours after signing a two-year deal with Pittsburgh. “You can’t try to be what he was. You can only be what you are.”

What Moncrief has been during his five-year career is dependable if not always prolific. A third-round pick by the Indianapolis Colts in the 2014 NFL draft, Moncrief brings 200 career receptions for 2,543 yards and 21 touchdowns to Pittsburgh, where he suddenly finds himself as the most experienced receiver in the room.

Defensive tackle Malcom Brown has agreed to terms on a three-year contract with the New Orleans Saints after spending all four of his previous NFL seasons with the New England Patriots.

... The Arizona Cardinals have agreed to terms with linebacker Terrell Suggs — the league’s active sacks leader with a 1321/2 — and quarterback Brett Hundley on one-year deals.

... Safety Tyrann Mathieu was been introduced at the Kansas City Chiefs’ practice facility after signing a $42 million, three-year contract to take over in their rebuilt secondary.

... The Patriots completed a trade with the Eagles for defensive end Michael Bennett, who will try to fill the void left by Trey Flowers’ move to the Lions.