Tommylee Lewis spent the past three seasons in New Orleans, where he played in 34 games, including four starts. 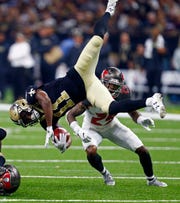 Lewis, an undrafted free agent out of Northern Illinois, spent the past three seasons in New Orleans, where he appeared in 34 games.

The 5-foot-7, 168-pound Lewis played in seven games in 2018, starting four. He missed nine contests with a knee injury. Lining up wide more than in the slot, he recorded three catches for 60 yards, including a 28-yard touchdown catch.

His most memorable moment came in the postseason, when he was the intended target late in the fourth quarter of the NFC Championship. Los Angeles Rams cornerback Nickell Robey-Coleman hit Lewis before the ball arrived, but the officials didn't throw a flag for pass interference. The Saints went on to lose the game in overtime.

Lewis' most productive season came in 2017, when he caught 10 balls for 116 yards and a touchdown.

He also handled kicks and punts for the Saints. In three seasons, he averaged 22.0 yards on 24 kick returns, and 9.3 yards on 36 punt returns.

Lewis joins a depth chart in Detroit that includes Kenny Golladay, Marvin Jones and Danny Amendola. Lewis likely will compete for the fourth spot behind that trio, as well as be in the mix to handle kickoffs for the team.