The Lions have a number of contenders to replace T.J. Lang in the starting lineup and aren't ruling out Crosby from that mix. 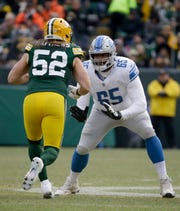 Phoenix — The release of T.J. Lang has created a massive void along the Detroit Lions' offensive line. But what is a void but an opportunity for someone to step up?

The Lions have a number of contenders for the position.

There's Kenny Wiggins, the veteran who filled in when Lang was injured last season. Joe Dahl is back in the fold. He's still a young, developing player who excelled when asked to play some fullback last year, bringing some positive momentum into this year. And there's free-agent addition Oday Aboushi, a journeyman who coach Matt Patricia praised for his toughness.

Of course, there's also the possibility the Lions add more competition for the job via the April NFL Draft.

More: Which Lions are buying into Matt Patricia? Coach says 'we find out' when we win

When the Lions drafted Crosby in the fifth round out of Oregon, general manager Bob Quinn raved about the value of the selection and noted the team viewed the college tackle as a versatile option who could play multiple spots.

As a rookie, Crosby, 23, was largely utilized on the edge of the line, either as an injury replacement at tackle or as a blocking tight end. But with Lang gone, the team won't discount moving Crosby inside in 2019.

"The game's a little bit different inside than it is outside for Crosby, so some of those situations we're gonna have to see if he can do that but we'll do that with all of those guys," Lions coach Matt Patricia said Tuesday.

And even if Crosby doesn't emerge as a strong contender for that role, Patricia explained why it's important to make sure the second-year lineman is properly cross-trained.