Coaches will be able to challenge calls and non-calls on defensive and offensive pass interference in 2019. 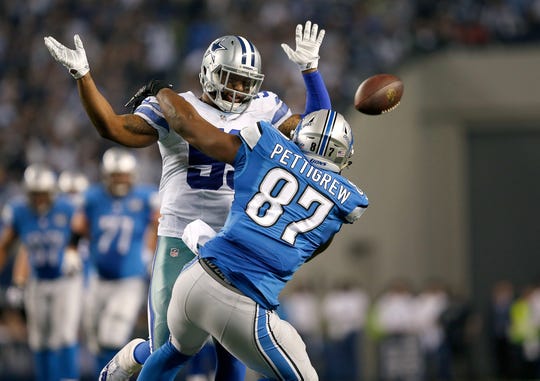 Phoenix — Four years ago, officials picked up a flag thrown against the Dallas Cowboys.  A pass interference call that would have given the Detroit Lions a first down in the fourth quarter of a playoff game, an infraction which might have helped the franchise win its first playoff game in more than two decades.

If that play happens next season, it can now be challenged.

In a monumental rule change coming out of the league meetings, the league approved a proposal that will allow coaches to challenge both calls and non-calls on offensive and defensive pass interference outside the final two minutes of the half, while reviews inside two minutes will be triggered by an official in the booth.

The proposal gained significant momentum after a blown call late in the NFC championship game last season, a non-call on a blatant defensive pass interference that cost the New Orleans Saints an opportunity to win the game.

Any rule change requires approval of 24 of the league's 32 teams. Only the Bengals opposed this expansion of replay, which will be applied on a temporary basis for the 2019 season and reevaluated next offseason.

Lions coach Matt Patricia didn't state a preference for any of the proposed changes during a Tuesday morning session with reporters. He was more focused on making sure he and his players understood the impact of any changes.

"The rules change every year," Patricia said. "The biggest thing for me and most coaches is, what exactly is the rule and how do we teach it to the players? Whatever the rules are, we all play the same rules."

One topic that didn't make it to a vote at the league meetings was a proposal by the Philadelphia Eagles to strip the Lions and Cowboys of hosting an annual Thanksgiving game.

The Eagles withdrew their proposal prior to the league meetings.

"They proposed it on the basis of competitive equity," Lions president Rod Wood said. "That's all it said. I think the thought process was the short week and the travel for whoever those two opponents are for those two games.

"Obviously, we're very much supporting the current system and keeping it that way," Wood said. "I won't get into what happened or why they withdrew it, but there was enough momentum generated by Detroit, Dallas and other teams to keep the tradition of the two games."