The popular belief is you don’t know what you have with an NFL draft class until three years have passed. So we graded the Lions' 2016 draft. 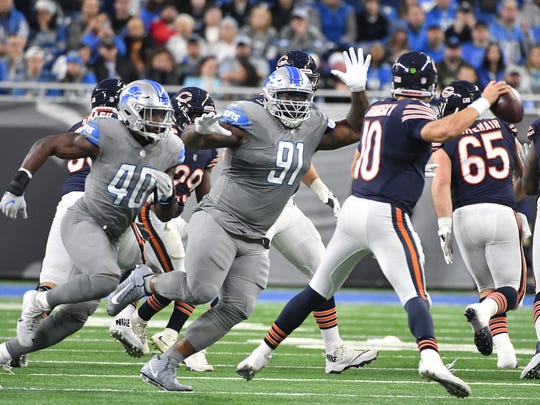 A'Shawn Robinson (91) has been a valuable piece on Detroit's defensive line since his rookie season. (Photo: Daniel Mears, Detroit News)

Allen Park — Detroit Lions general manager Bob Quinn has said he drafts players with what they'll be in their second year in mind. Still, the popular belief is you don’t really know what you have with an NFL draft class until three years have passed.

With that in mind, and sticking to an annual tradition, we've re-evaluated the Detroit Lions’ draft from three years ago, prior to the upcoming batch of rookies being added to the roster later this month.

The 2016 draft was Quinn's first as Detroit's general manager.

In addition to grading the individual selections, there will also be an overall mark, with that calculation weighing each pick by the draft pick value chart.

It was evident early in the process the Lions would be focusing on offensive line early in the draft. Understanding that, the team’s choices boiled down to Decker and Alabama center Ryan Kelly at No. 16. Given the premium value of a left tackle, Detroit’s choice made sense.

Decker delivered immediately with a strong rookie season and looked to be a long-term solution at one of the game’s more important positions. But his development was temporarily stunted in 2017 when he suffered a serious shoulder injury during OTAs that required surgery and cost him the first half of his second season.

After battling through some rust, Decker finished that season well enough and came into camp his third year closer to full strength. He had a good season, especially as a pass protector, where he allowed just three sacks and four quarterback hits, but his run blocking fell short of the bar he set as a rookie.

Robinson played early and played well for the Lions as a rookie, taking over a starting job by the end of the season. He showed a well-rounded skill set and stopped the run effectively, while displaying a knack for getting his hands into the passing lane and batting down balls.

His second-season improvement was modest, and probably fell short of expectations, but Robinson took off in his third year, his first playing in coach Matt Patricia’s scheme.

Although the tackle and sack numbers didn’t change much from year to year, Robinson played with excellent gap-integrity that doesn’t show up on the stat sheet and served a key role in the team’s dominant run defense in the second half of 2018. There’s still room for growth as a pass-rusher, but there’s little question the Lions should try to lock him up with a second contract if possible.

Graham Glasgow established himself as Detroit’s most reliable lineman, both from a durability and performance standpoint, last season. (Photo: Daniel Mears, Detroit News)

When former first-round pick Laken Tomlinson was floundering, Glasgow stepped into the starting lineup for the final 11 games of his rookie season and provided more consistency than the previous setup.

In his second year, Glasgow stayed at left guard until a late-season switch to center, showing the desired development from Year 1 to 2 both as a run blocker and pass protector. Equally important, he displayed exceptional toughness, playing all 1,041 offensive snaps.

For 2018, Glasgow made the permanent switch to center, replacing Travis Swanson, while maintaining his consistent performance and trademark durability. He showed improvement protecting quarterback Matthew Stafford, allowing a career-low one sack and 21 pressures, but had some trouble with penalties by drawing nine flags, including a team-high five for holding.

Killebrew looked like a long-term solution at strong safety after his rookie season, but he wasn’t able to overcome some of his struggles in coverage during his sophomore campaign, which led to a position switch last year and a relegation to strictly playing on special teams.

Given that he played more than 77 percent of Detroit’s special teams snaps in 2018, Killebrew is still providing baseline value for his draft slot, but it’s slightly disappointing he hasn’t been able to carve out a role in Patricia’s multiple-look defense.

In three years, Dahl hasn’t been able to climb out of his role as a solid backup. He started three games as an injury replacement at the end of 2017 season and performed well enough, but when T.J. Lang suffered a season-ending injury last year, the team opted to play less-than-stellar veteran option Kenny Wiggins ahead of Dahl.

In fact, the only meaningful action Dahl saw in 2018 was out of position as a fullback. And to his credit, he embraced the role and performed with passion.

These comments might not seem in line with the grade, but when you consider Dahl has played just 357 offensive and special teams snaps during his time in Detroit, it’s difficult to award Quinn a higher mark for the selection.

Williams had the frame and energy that gave him the look of a small-school sleeper, and he did just enough in a part-time role as a rookie on both defense and special teams that it was easy to believe he could earn a starting job in his second season.

And while things were trending that direction during the early portions of the 2017 offseason program, he quickly fell out of favor as veterans Paul Worrilow and Nick Bellore passed Williams on the depth chart. By the end of training camp, it was clear it wasn’t going to turn around and the fifth-round pick from the year before was cut.

Rudock was the only rookie from Quinn’s first draft class who didn't survive his first training camp, but after clearing waivers, he quickly landed back on Detroit’s practice squad. And when the Bears came sniffing around during the regular season, the Lions promoted him to the main roster to prevent a poaching.

Rudock’s second year in Detroit was his best. After a strong training camp and preseason, he earned the backup quarterback job. He only appeared in one game, a blowout loss to Baltimore, where one of his five passes was intercepted and returned for a touchdown.

In 2018, veteran Matt Cassel came in and beat out Rudock for the backup job. He spent another season on the practice squad before signing with Miami after the season. Rudock never developed into the reliable backup Detroit hoped he could be, which also meant he never matured into a meaningful trade chip.

Anthony Zettel (69) started all 16 games in 2017 but was cut before the 2018 season after Matt Patricia took over. (Photo: Daniel Mears, Detroit News)

A bad scheme fit for Patricia, Zettel was cut before the start of his third season. But prior to that, he showed steady improvement and provided production that outsized his draft slot.

After seeing the field sparingly as a rookie, recording 13 tackles and a sack, Zettel played a key role in helping replace the injured Kerry Hyder in 2017. Starting all 16 games, Zettel tallied 43 tackles and 6.5 sacks. He also led the team with 43 pressures.

You have to forgive Quinn for not realizing what he had in Don Muhlbach. Given the veteran long snapper was entering his age 35 season, the general manager probably thought he could get younger and cheaper at the position.

But the competition was never close. Muhlbach was far more consistent during Landes’ first offseason and the rookie ended up on injured reserve by the end of camp. He never even made it to his second camp and was cut by the Lions the following June.

Coming out of college, Washington had a reputation as a big-play threat who struggled with ball security. The Lions hoped to correct the latter and capitalize on the former. And while Washington’s ball security was never really an issue in Detroit, his subpar vision led to him plowing into traffic far more often than finding an open lane.

Washington averaged a dismal 2.8 yards per attempt over two seasons in Detroit, and only three of his 110 carries went longer than 10 years.

Not a bad first draft for a rookie general manager. Quinn's 2016 class is unquestionably buoyed by the top three choices, who have all developed into above-average to good starters. And it never hurts to find a core special teams player on Day 3.

The other third-day choices don't hold up as well in hindsight, as only Dahl remains on the roster, while Williams and Landes didn't even make it to Week 1 of their second seasons. We'll obviously look closer at it next year, but Quinn seemed to do better on Day 3 in recent years, with players such as Jamal Agnew, Da'Shawn Hand and Jalen Reeves-Maybin among the choices.