'There was no question:' In 1989, Lions were locked on Barry Sanders at No. 3 in NFL Draft

Wayne Fontes already had made up his mind before he arrived in Stillwater, Okla., early April 1989, two weeks before the NFL Draft.

'There was no question:' In 1989, Lions were locked on Barry Sanders at No. 3 in NFL Draft

Detroit News reporters discuss the Lions' first-round options and what the team needs to accomplish over the entire NFL Draft. The Detroit News

Allen Park — Wayne Fontes already had made up his mind before he arrived in Stillwater, Okla., early April 1989, two weeks before the NFL Draft. 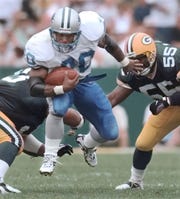 Barry Sanders rushed for more than 15,000 yards in just 10 seasons after the Lions selected him No. 3 overall in the 1989 NFL Draft. (Photo: Jack Gruber, Detroit News)

But the trip wasn’t a total waste for the 49-year-old Detroit Lions coach; it provided Fontes an opportunity to let everyone else know he had made up his mind.

The Lions held the third pick in the draft 30 years ago. The Dallas Cowboys, coming off a 3-13 season and with a new owner and head coach in Jerry Jones and Jimmy Johnson, already were negotiating contract terms with UCLA quarterback Troy Aikman to be the No. 1 overall pick. And it wasn’t a secret the Green Bay Packers had zeroed in on Michigan State offensive tackle Tony Mandarich with the No. 2 choice.

That left the Lions with a trio of compelling options at No. 3, including Alabama linebacker Derrick Thomas and Florida State cornerback Deion Sanders.

Given Fontes’ background as a defensive coach, there was a perception the Lions would ultimately go one of those two directions, more than likely Sanders, the playmaking defensive back that oozed swagger on and off the field.

More: Who sizzled, who fizzled from the first round of the 1989 NFL Draft

But Fontes was smitten with another, and he didn’t need to see Oklahoma State running back Barry Sanders run a 40-yard dash or perform a vertical jump to rubber stamp the opinion the coach had formulated while consuming the film of Sanders’ 1988 season, when the rushed for 2,850 yards in 12 games, en route to claiming that year’s Heisman Trophy.

“After I saw the film, there was no question, Barry was the guy that we wanted,” Fontes said in a phone interview with The Detroit News. “I was a new head coach, all these people were writing notes, he ran this fast and he jumped this high. I looked at my scouts and said, ‘Look, you have all these things about how high he jumps, how fast he runs the cones, but the guy can play. He’s a football player.’ “

Sanders’ workout measurables would be considered elite today. He ran the 40 in 4.39 seconds and he posted a vertical of 40 inches. Those in attendance were buzzing, and when the workout concluded, several general managers gauged the Lions’ interest in trading the team’s pick. 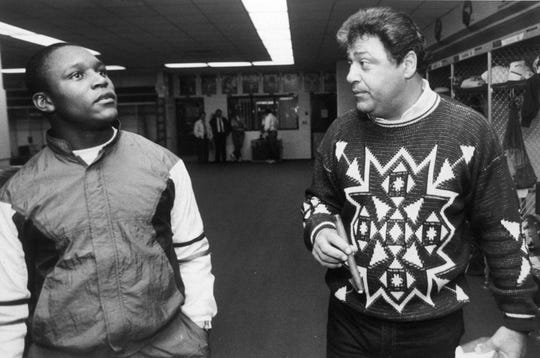 Former Lions head coach Wayne Fontes (right) said the team was approached about trading the No. 3 pick in 1989, but Detroit had its sights set on running back Barry Sanders (left). (Photo: Richard Sheinwald, Associated Press)

Chuck Schmidt, who was in the process of taking over the Lions’ general manager duties from Russ Thomas in Detroit in 1989, tried his best to listen to offers. But Fontes, in the colorful style that became his trademark during his time in Detroit, didn’t come close to concealing the franchise's true intentions to select Sanders.

When they hopped into the car to return to Detroit, Fontes and Schmidt toasted with what they had at their disposal, some Diet Coke. And once they were home, Fontes had no problem selling owner William Clay Ford on Sanders.

“I remember talking to Billy Sims before the draft and he asked me, ‘How do you like the running back?’ I said, ‘Billy, he’s great. Billy, he’s going to make people forget you,’ “ Fontes said. “He laughed and he said, ‘I think so.’ I told Mr. Ford exactly what Billy said and I said, ‘Mr. Ford, I know you love running backs, I know you love Billy, but this guy is going to make you forget Billy Sims.’”

The 1989 draft proved uniquely legendary, and in many ways, as long as the Lions held on to the No. 3 choice, they would have struggled to make a bad decision. Thomas and Deion Sanders came off the board immediately after Barry, with Thomas landing in Kansas City and Sanders going to Atlanta.

All three would go on to have Hall of Fame careers. The same with Aikman, who went on to win three Super Bowls in Dallas.

Mandarich, on the other hand, is viewed as one of the biggest busts in NFL history. Due to a combination of struggling to adjust to pro blocking techniques, cutting the steroids that fueled his rise to prominence in college and other addiction issues, he was out of the league after three disappointing seasons with the Packers. After he cleaned up, he returned to the league following a four-year layoff to play three more years with the Indianapolis Colts (1996-98).

As for the No. 3 pick, Fontes loved both of the defensive players, and didn’t mind the egos either showcased, which might have rubbed other decision-makers the wrong way. Still, Barry’s personality, a low-key confidence wrapped in a blanket of humility, was a separating factor for Fontes. 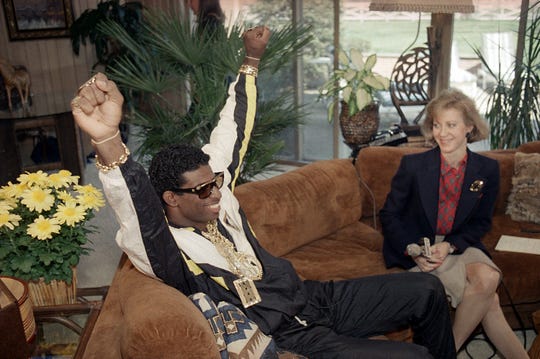 Florida State cornerback Deion Sanders, left, expressed apprehension over the possibility of landing in Detroit with the No. 3 pick in the NFL Draft. He was taken by the Atlanta Falcons at No. 5. (Photo: David Banks, Associated Press)

The other complicating factor with Deion Sanders was the dual threat of a holdout and him opting to play baseball full time, instead of joining the Lions.

He confirmed those fears at the draft, during an interview with ESPN, right after the Lions selected Barry Sanders.

“I was kind of scared; I thought Detroit was going to take me,” Deion Sanders said. "I would've asked for so much money they would've had to put me on layaway.”

Even in Atlanta, Deion Sanders leveraged his baseball career against the Falcons. He held out in both 1989 and 1992 and played both sports during his entire five-year stint with the franchise.

Barry also held out as a rookie, missing all of training camp before agreeing to a contract days ahead of Detroit’s season opener. He didn’t start that game against the Cardinals, but Fontes let him play and Barry ran for 71 yards and a touchdown on nine carries.

“I wanted to make sure he was in football shape, which he was,” Fontes said. “I kept calling him up and he’d get his helmet on and he’d come over and I’d say, ‘All right, Barry. How do you feel?’ He’d say, ‘I feel good, Coach. I feel good, Coach.’ OK, I’d say, ‘Not yet, not yet, not yet.’ I wanted to see how things were going. I’d send him back and the crowd would groan. They wanted me to put him in right away. When we finally put him in, the place went crazy. And the first time he touched the ball, there was greatness. And there was greatness with Barry until the end.”

Fontes said the only player he would have considered drafting instead of Barry was Aikman.

“No question,” Fontes said. “He was a franchise quarterback and football teams are built on that guy. Without that guy, it’s hard to win a Super Bowl. …This running back took us as far as we could go.”

The Lions never found their franchise quarterback when Barry was in Detroit. They drafted Rodney Peete in 1989, who went 21-26 as a starter during five seasons with the franchise. The next year, the team used a first-round pick on Heisman winner Andre Ware, but he started just six games in four seasons. And there was the swing-and-miss on free agent Scott Mitchell, who like Peete, posted largely average numbers and a sub-.500 record in five seasons in Detroit.