Amendola's work ethic during the offseason program is pushing Golladay to make sure he's not being outworked by the veteran.

Detroit News reporters discuss the Lions' first-round options and what the team needs to accomplish over the entire NFL Draft. The Detroit News

Allen Park — Make no mistake about it, the Detroit Lions needed a slot receiver and Danny Amendola fit the bill this offseason. 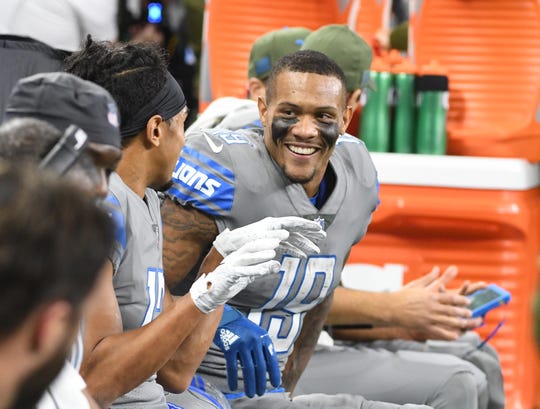 But beyond what the veteran offers on the field, he also adds a hard-to-quantify intangible to the locker room, having a familiarity with the culture and expectations head coach Matt Patricia is trying to instill in Detroit, having spent multiple years together in New England.

Even in the first couple weeks of the offseason program, the Lions are seeing the impact Amendola is having on the roster's younger players, namely fellow wide receiver Kenny Golladay.

"We're still just figuring each other out, but I know one thing, his work ethic is crazy," Golladay said. "It's through the roof. He wants to push everyone. And when you have a guy like that, a vet guy, a savvy vet, you just really want to follow up under him. I'm not going to let him go out there and out-run me."

Golladay's production exploded last season, his second with the Lions. A third-round pick out of Northern Illinois in 2017, he hauled in 70 passes for 1,063 yards and five touchdowns in 2018.

More: 'There was no question:' In 1989, Lions were locked on Barry Sanders

"The challenge is just picking up where I left off," Golladay said. "Don't become complacent, you know?

"Just need to keep my same focus and that's what I'm going to do."