Some observers believe the Detroit Lions overvalued the tight end position in taking Iowa’s T.J. Hockenson with the No. 8 pick in the NFL Draft.

Rogers, Wojo and Niyo offer their final thoughts on the Lions' 2019 draft class. The Detroit News

Some observers believe the Detroit Lions overvalued the tight end position in taking Iowa’s T.J. Hockenson with the No. 8 pick in the NFL Draft. 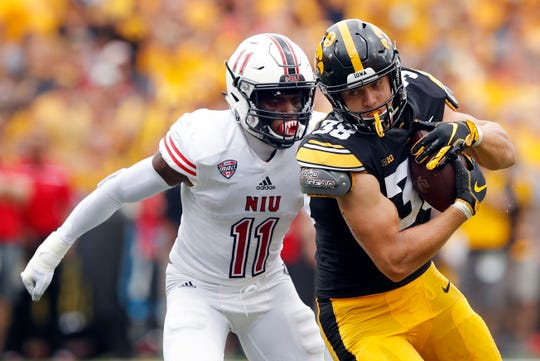 McShay says Hockenson was the best pick for the Lions among the nine selections they made over seven round during the draft Thursday through Saturday.

“Hockenson might just be the safest, most complete prospect in the entire draft class” McShay said. “Lions fans might have cringed to see their team take a first-round tight end, remembering the letdowns of Eric Ebron and Brandon Pettigrew, but this kid brings a different level of potential. He has 6-foot-5 size, 4.70 speed and great strength. Detroit will be able to use him as a blocker or receiver inside, or bump him outside where his top-end route running and outstanding ball skills take over. His compete level is great, and he has a lot of toughness. Expect Matthew Stafford to use his rookie big man a ton with not a lot happening in the Lions' pass game.”

“Another guy I considered here: Boston College safety Will Harris,” McShay wrote. “He has good instincts and flashes as a run-stopper with good closing speed. I thought he'd be a good mid-round sleeper, so Detroit getting him at No. 81 is solid value.”

► Long (No. 79 overall): “Long brings great instincts as a man-to-man cover corner. His speed is OK, as are his ball skills. But those instincts, along with an ability to reroute receivers, will make him effective in the NFL. His production numbers won't stand out, but his coverage efficiency was impressive.”

► Winovich (No. 77 overall): "He's a technician with great hands and good speed, and he's going to give you plenty of effort. I like his array of pass-rush moves and his instincts. Stop me if you've heard this before, but New England got an underrated prospect who could end up being an effective contributor."

► Layne (No. 83 overall): "Corner is a sneaky need for the Steelers. And they got Layne 30 spots past where I ranked him. Even with Steven Nelson in black and yellow, Layne should push for a top-three job right out of the gate. He is a press corner who can read receivers and then turn and run with them very well."