Marvin Daniel “Danny” LaRose, a former offensive lineman for the Detroit Lions in the early 1960s, died Saturday in Luther, Mich., at the age of 80. 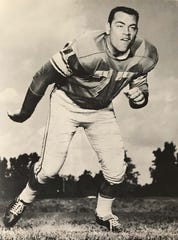 Marvin Daniel “Danny” LaRose, a former offensive lineman for the Detroit Lions in the early 1960s, died Saturday in Luther, Mich., at the age of 80.

LaRose, was the Lions’ second-round draft selection (23rd overall) in 1961 after he earned consensus All-America honors as a senior defensive end for an undefeated Missouri team in 1960. He finished eighth in the voting for the Heisman Trophy that season. He then played the first three seasons of a six-year NFL career for the Lions, starting at right tackle for George Wilson’s teams.

LaRose, who also played for the Pittsburgh Steelers, San Francisco 49ers and Denver Broncos, was inducted into the University of Missouri Intercollegiate Athletics Hall of Fame in 1992.

LaRose is survived by his wife, Janet, and his six children. Visitation will be held Wednesday in Luther at the LeRoy Methodist Church from 5-7 p.m. as well as Thursday from 9-10:30 a.m. prior to the funeral. In lieu of flowers, donations may be given to Luther United Methodist Church Steeple Fund, 315 State St., Luther, MI 49656.