Ribs ended up being the siren song that snapped Da'Shawn Hand from his efforts to abstain from red meat this offseason. 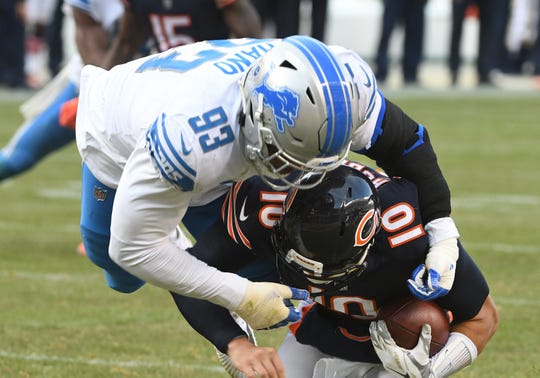 Detroit Lions defensive lineman Da'Shawn Hand had grand ambitions this offseason to ditch red meat. He thought it would be good way to get lean for the upcoming season. (Photo: Daniel Mears, Detroit News)

Allen Park — Detroit Lions defensive lineman Da'Shawn Hand had grand ambitions this offseason to ditch red meat. He thought it would be good way to get lean for the upcoming season.

"I tried to," Hand said. "I came across some ribs and that kind of killed the whole thing. I'm going to try to. I'm going to slowly, but surely get to it."

Who can blame him? Some of us aren't cut out for highly restrictive diets. Especially when we have to cut out ribs.

On Wednesday, Hand was in paradise at the franchise's "Taste of the Lions" event, where the team partners with a couple dozen local restaurants for an evening when fans can sample the fares while mingling with the players and coaches at Ford Field.

Hand, who is quite handy in the kitchen, joked about having his own booth next year where he'd make his go-to dish.

"A fan favorite of mine is my homemade lasagna," Hand said. "I like making lasagna from scratch. I've got a little secret sauce. I kind of add some seasonings and spices."

It wouldn't be his first time cooking for a crowd. While at Alabama, he ran an underground business from his dorm, selling BBQ-glazed burgers for $5 a pop.

Pushing for a draft

The Lions still hope to bring an NFL Draft to Detroit in the near future.

This year's event, emanating from Nashville, was a wild success for the league. Lions president Rod Wood, who is part of a committee trying to bring major events to the city, said he got some ideas watching how Nashville handled hosting.

"I think they did a great job," Wood said. "Obviously, they have a special area there with Broadway and the bars and restaurants. I think what we learned, is we need to do something, if we're going to do it here, that's really iconically Detroit. We have a few ideas how we might do that. We're in the running a couple years from now, I think, to still bring a draft here.

"We can't do what they did in Nashville, but there are things that we might be able to do that are in that vein and have the whole downtown showcased and probably use multiple venues."

The NFL is expected to announce the location of the 2021 draft this offseason and 2022 next year. Detroit remains in the mix for both.

The topic of retiring numbers came up this week after rookie T.J. Hockenson selected No. 88, formerly worn by Hall of Famer Charlie Sanders.

Sanders is one of 18 players who is featured in the team's Pride of the Lions, but the franchise only has a handful of retired numbers. Wood hinted that might change in the near future.

"Obviously, we're very happy with T.J. (Hockenson) and the Sanders family embracing him wearing the jersey," Wood said. "It did kind of raise the point about retiring numbers and I may have more to say about that later this year. We're getting ready to celebrate the league's 100th anniversary, so we may leave some of that until the celebration of that."