Tuesday's NFL: Suh on verge of deal with the Bucs

One of the ugliest incidents Ndamukong Suh, who reportedly is closing on a one-year deal with the Bucs, was involved in was with a player he will likely call a teammate – Bucs offensive lineman Evan Smith.

Tuesday's NFL: Suh on verge of deal with the Bucs 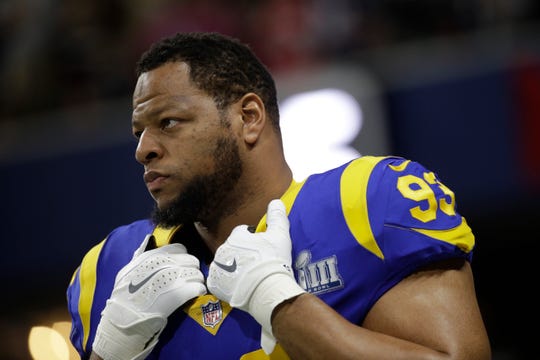 A day after releasing Gerald McCoy, the Bucs are closing in on a one-year deal with Ndamukong Suh, according to NFL Network Insider Ian Rapoport. (Photo: Patrick Semansky, AP)

Tampa, Fla. — Throughout Ndamukong Suh’s nine-year NFL career, a reputation of being one of the league’s most temperamental players has followed him.

Some simply call his approach aggressive play for an aggressive game.

Others call him dirty, including his peers, who have voted him the league’s dirtiest player.

But there’s no doubt he brings an edge to a defense.

He’s been unapologetic about aggressively taking down quarterbacks, and he’s taken several fines for doing so. According to Spotrac, he’s been fined $660,392 over his career. He was fined more than $400,000 in his first five years with the Lions alone.

One of the ugliest incidents Suh, who reportedly is closing on a one-year deal with the Bucs, was involved in was with a player he will likely call a teammate – Bucs offensive lineman Evan Smith.

A day after releasing Gerald McCoy, the Bucs are closing in on a one-year deal, according to NFL Network Insider Ian Rapoport.

Back on Thanksgiving in 2011, when Suh was still playing for the Lions and Smith was in his second full season with the Packers, Suh was ejected from a game after taking an unsportsmanlike conduct penalty after he drove Smith’s head into the ground while getting up from a play and then kicking Smith as he lay on the ground.

Suh received a two-game suspension. The following month, a report surfaced that said the Packers defensive line coach James Campen instructed Smith to untie Suh’s shoes at every opportunity, and Suh motioned to his feet when pleading with an official following his ejection.

Before the division rivals met for the second time that season, Smith said that Suh called him to apologize shortly after the incident, and Smith said he had no reason not to forgive Suh.

“He’s cool, he apologized, and there’s no hard feelings and that’s pretty much it,” Dietrich-Smith told the Associated Press.

“I think we’ve all moved past it. It’s a big learning experience for everybody. I think everyone in the league can take note of everything that happened and I think every player is going to take a step forward to move past that kind of stuff.”

A person familiar with the situation says the New England Patriots have reached an agreement on a two-year extension with receiver Julian Edelman.

The deal is worth $18 million and includes an $8 million signing bonus and $12 million in guaranteed money.

... A Florida judge has delayed the trial of New England Patriots owner Robert Kraft on a misdemeanor charge that he paid for sex at a massage parlor.

Judge Leonard Hanser agreed Tuesday to postpone the trial indefinitely while prosecutors appeal his decision blocking their use of secretly shot video.