Starting guard spots still 'a work in progress' for Lions

Replacing retired T.J. Lang’s guard spot is one of the main storylines at Lions training camp.

Starting guard spots still 'a work in progress' for Lions

Lions quarterback Matthew Stafford says learning a new offense is a 'complex thing' but his experience with change helps. The Detroit News 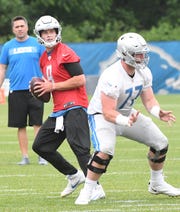 There’s uncertainty about how many spots — and which — are open on the offensive line’s interior. Frank Ragnow spent most of the early part of the offseason at his college position of center, with Graham Glasgow moving from that spot to guard.

“I’m certainly not going to say with a straight face that this is final, this is finished,” offensive line coach Jeff Davidson said Wednesday. “It’s a work in progress, and I’m looking forward in camp to be able to try to iron out all the details with what’s going to work best for us.”

Among the candidates to start at left guard include veteran Kenny Wiggins, who started 10 games for the Lions last season; free agent Oday Aboushi, who played for new offensive coordinator Darrell Bevell in Seattle in 2017; and the versatile Joe Dahl.

“We don’t even know who our starting guards are going to be, that’s the truth of the matter,” Davidson said. “We’re trying to create competition. It’s what’s fun for us is those guys going at it, getting the best out of them each day, looking for daily improvement and at the end of camp, hopefully coming out with what we say is the best group of five.”

With free-agent defensive end acquisition Trey Flowers out for the start of camp on the physically unable to perform list, could there be concern he misses valuable time fitting in with new teammates and a new team?

“None, I don’t have any,” defensive line coach Bo Davis said. “He’s been doing it, knows it. Just pops right in that day. I don’t see any issue with that at all.”

Flowers, who signed a five-year, $90 million contract, had offseason shoulder surgery. A player can be removed from the PUP list at any time before the start of the regular season.

He also missed the early part of the offseason program with the injury, but Davis said he already sees the drive that led Flowers, 25, to three straight seasons of at least 6.5 sacks and at least 14 games played in New England, including two under former defensive coordinator Matt Patricia, his new head coach.

“Great guy, has a great work habit,” Davis said. “When you sit down and meet with the guy and you talk to him, he’s a great guy to be around. I love everything about him.”

Quarterback Matthew Stafford had a much-documented offseason of tumult, which included his wife, Kelly, undergoing surgery to remove a brain tumor and — on a much lesser plane of importance — a new offense to learn.

On Wednesday, Stafford acknowledged the struggles, but also said he’s not unique in them.

“I wouldn’t imagine it’s much different than a lot of people sitting out here,” Stafford told the assembled press. “You guys are asking me questions, we all deal with stuff that’s going on in our job, and we have things going on at home too.

“It definitely put things into perspective. No doubt I love spending time with my family, but it’s nice to be back playing a little bit of ball and seeing our guys too.”

While there’s a perspective shift, Stafford said the fire still burns heading into year No. 11.

“I still love this game, I still love preparing for it, I love competing,” Stafford said. “I try to think that I do a decent job of kind of separating the two. When I’m home, I’m home, and when I’m not, I’m here obviously all in.”