Tate blamed a fertility drug for the positive test and is appealing the ban.

Tate is appealing the league's decision and released a statement on social media explaining the reason for the positive test. 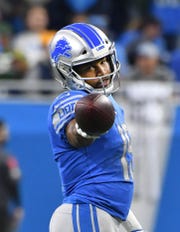 "This past April, during the offseason, my wife and I decided to see a specialist for fertility planning," the statement said. "I started the treatment prescribed to me and just days later I discovered it contained an ingredient that is on the league's banned substance list. I immediately discontinued use, I reported the situation to the independent Administrator of the NFL Policy on the Performance-Enhancing Substances, and I spoke with my coaches and general manager. I did all of this well before a failed test was even confirmed.

"Per NFL protocol, an initial suspension was imminent, but myself and the Giants organization are confident in the facts, and eagerly await my appeal to put this behind us."

Tate and his wife have two young children.

According to ESPN, Tate's appeal will be heard the first week of August, allowing the matter to be resolved well before the start of the season.

Tate, 30, landed a four-year, $37.5 million contract with the Giants this offseason. He finished last year with the Philadelphia Eagles, after he was acquired at the trade deadline from Detroit.

An integral part of the Lions offense the previous five years, he was the team's leading receiver at the time of the trade.  From 2014-17, Tate averaged 93 receptions, 1,056 yards and five touchdowns for Detroit.

The Lions received a third-round pick in exchange for Tate. They team traded that pick, along with a sixth-rounder, to move up seven spots where they selected Boston College safety Will Harris.