The Lions' game Saturday night is largely about roster battles and player development. 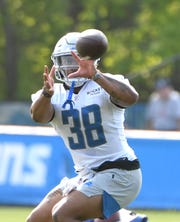 Houston — The Detroit Lions play their second preseason game Saturday night against the Texans. Based on last year's schedule, many of the team's healthy starters are likely to see at least a handful of snaps.

Still, game two is largely about roster battles and player development. With that in mind, here's a player at each position we'll be watching.

Josh Johnson: We don't know for certain whether Matthew Stafford will play in this game, but based on last year's schedule, he'll probably see a couple series as he ramps up for the regular season. Obviously, an early look at the starter, operating in a new scheme, is well worth a look, but the Lions' backup competition carries its own intrigue.

Johnson, a journeyman on his 13th team, was dropped into the mix last week following Tom Savage's concussion. Johnson's quick acclimation on the practice field has been impressive, opening the door for him to make a legit run at the No. 2 job. A strong performance against the Texans significantly bolsters those odds.

Ty Johnson: One of the few bright spots in the preseason opener, the electric speed Johnson displayed in college has thus far ported to the professional ranks. He's received a handful of reps with the first-team offense in recent practices, including a 15-yard touchdown run in the joint sessions with the Texans. With Kerryon Johnson likely to be extremely limited, and C.J. Anderson getting a little banged up in practice, the rookie should get an extended look to show what he can do.

Chris Lacy: Following Jermaine Kearse's season-ending leg injury in the opener against the Patriots, the Lions are looking for someone to step up and fill the role of the No. 4 receiver. Lacy is one of several young contenders on the roster, but no one else offers his size.

For the Texas native, the priority is establishing consistency. He's flashed ability throughout training camp, but the team is in need of more than bursts of production.

Austin Traylor: The Lions' tight end room is loaded, so to say Traylor is a long shot to make the team is putting it kindly. But the former AAF player has made a good impression on the practice field and had a couple grabs for 20 yards against the Patriots. Earning a practice squad spot is within reach if he continues to show he can be a reliable, dual-threat option.

Joe Dahl: The only returning player from last week's list, Dahl received a long look with the first-team offense as he attempts to make his case for the vacant starting guard job. He added some weight and strength this offseason, and so far, that appears to be paying off.

Kevin Strong: We've been intrigued by Strong's performance throughout camp. The undersized defensive tackle has shown impressive pass rush ability, putting him in position to contend for a roster spot in a deep and talented defensive line room.

An emotional layer to Strong's pursuit was uncovered this week, when it was learned his father has stage-4 lung cancer. From the Houston area, his family, including dad, came out to support Strong this week. 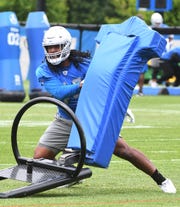 Jalen Reeves-Maybin: Another player who has continued to bulk up, the instinctual third-year linebacker out of Tennessee has impressed his coaches with his off-field commitment to improvement.

Outside of an early blown coverage against the Patriots, Reeves-Maybin had a solid day playing a heavy workload. A top special teams performer, he's in line to see some work this season in sub-packages, and would be among the first names called upon if there's an injury.

Andrew Adams: Adams has lived up to his playmaking reputation during his short time with the Lions, always finding himself around the ball, ready to capitalize on mistakes. The Lions have a deep safety group, so nothing is guaranteed beyond starters Tracy Walker and Quandre Diggs, and third-round rookie Will Harris. Adams will need to continue to make plays to earn his spot.

What: Second game of preseason