The Lions have been on Benzschawel for a while, scouting him thoroughly after his junior season at Wisconsin in 2017. 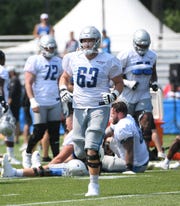 Cleveland — If asked whether the Lions will open the 2019 season with an undrafted rookie on the roster, the safe bet would be yes.

For nine consecutive years, at least one player has defied individual expectations and earned a job with the Lions, including five during general manager Bob Quinn's first three seasons with the franchise.

There are several contenders to continue the streak this season, headlined by one of the more coveted players who didn't hear his name called during the draft, former Wisconsin offensive lineman Beau Benzschawel.

The Lions have been on Benzschawel for a while, scouting him thoroughly after his junior season in 2017, when there was a belief he might declare for the draft as an underclassman.

"When he was a junior, he had a really good year at Wisconsin," Quinn said. "We had pretty good grades on him going in, and then senior season, I would say he probably played about the same. I didn’t see a lot of improvement from junior to senior year, and I was just as shocked as everybody else (he went undrafted) because we would have considered him in the draft at some point. We just didn’t and felt very fortunate to get him here."

Benzschawel visibly struggled during his first few weeks of practice with the Lions, something Quinn acknowledged, but things started to come together throughout training camp and the preseason. That kind of positive development is exactly what the coaching staff is looking from its young players.

"He’s a guy that I’d say has gradually improved every day," Quinn said. "Wasn’t great in the spring, wasn’t great at the start of camp, but you just see gradual improvements of him and kind of his upside with being as big as he is and as smart as he is and as tough as he is. He’s got to get a little stronger and he’s got to work on some things, but he’s a guy that we’re excited about and we’ll kind of see how it shakes out here over the weekend."

Unfortunately for Benzschawel he wasn't able to put a cherry on top of his offseason resume, struggling in pass protection throughout Thursday's preseason finale against the Browns. On the positive side, he did play some center for the first time, showing the possibility for added versatility.

Whether it impacts his chances to make the team remains to be seen. The Lions need to trim the roster from 90 players to 53 by 4 p.m. on Saturday. And the good news for many UDFAs who don't make the initial cut, they'll get a second audition as members of a practice squad. Those 10-man units will be established the following day.

You might think the Lions' tendency to give undrafted rookies a fair shake, rewarding those who prove they belong would be good advertising with agents in future years, but Quinn said not every agent sees it that way. Some are more concerned about the instant gratification of netting a nominal signing bonus, as opposed to getting their client a legit opportunity to make a roster.

"I wish I could deal with all the great agents that really do their research and see I’m going to give the guy a fair chance," Quinn said. "Listen, we tell the guys when they come in, rookie minicamp weekend, (coach) Matt (Patricia) tells them, I tell them, ‘Hey, listen, it doesn’t matter how you got here. If you’re better than the guy I drafted in the fifth round, so be it.’

"I’ll admit mistakes and we’ll keep the best 53 guys, or if you’re a practice squad guy, we’ll keep working with you and we’ll try to get you on the roster later in the season. I’ve always been that way. In New England, that’s how we did it, and if you develop a history of being honest with agents and say I’m going to give this guy a chance."