The preseason is a wrap and it's time for the Detroit Lions to make the difficult decisions to bring the roster down to 53 players.

Cleveland — The preseason is a wrap and it's time for the Detroit Lions to make the difficult decisions to bring the roster down to 53 players for the start of the regular season.

After watching more than two dozen practices and four preseason games, here's our projection for how things will shake out prior to Saturday's 4 p.m. deadline.

► Thoughts: Johnson made a strong run at the job, and he should be on speed dial if anything goes wrong during the season. But reading between the lines with coach Matt Patricia's comments after Thursday's preseason finale, placing emphasis on the fact the evaluation will go back to the spring, Savage is the guy.

The Lions seem more comfortable with what Savage brings to the table off the field, including his work in the meeting room and on the sideline. And that's important when selecting a backup.

Personally, I like the stylistic contrast to Stafford that Johnson brings to the table, but understand the comfort of familiarity. 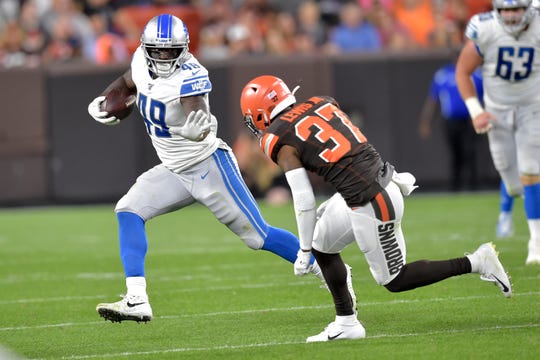 ► Thoughts: Ty Johnson's stock has rocketed throughout his first preseason, giving the Lions the confidence to part ways with do-everything back Zach Zenner. Who knows how much playing time the rookie will see early in the season, but the fact he was held out against Cleveland suggests it will be more than a snap here and a snap there.

As for Thompson, he put together a strong camp and preseason, earning a practice squad opportunity. There will always be value in a big-bodied back who is willing to run through defenders the way he does.

► Thoughts: Fulgham entered Thursday on the bubble after losing the momentum he built coming into training camp. But against the Browns, he showed the ability to high-point the ball (even though he ended up out of bounds), to make a man miss in the open field, and the mental fortitude to move past mistakes, resoundingly rebounding from his fumble the previous week.

For us, the fifth job comes down to Lacy or Powell. If the Lions had a bigger need for a return man, we probably would lean a different way, but given Jamal Agnew and Ty Johnson's skill sets, Powell's special teams abilities are redundant.

Lacy, on the other hand, offers a big-framed target in the passing game and a blossoming ability to cover kicks, including as a gunner on punts.

Powell and Duhart would both be excellent practice squad candidates.

► Thoughts: We went back and forth on Nauta throughout the preseason. His evaluation has been anchored by some dropped passes, but his performance against the Browns, with a pair of clutch catches down the stretch were ultimately the difference.

The fact those grabs, including a 20-yard touchdown, came after he got banged up is a testament to his toughness. That's a skill all coaches value, but particularly Patricia.

► Thoughts: If you were hoping to get a strong evaluation of some of the team's younger options against Cleveland, you were left pretty disappointed. The patchwork group struggled mightily with chemistry, communication, and more often than you'd like to see, basic fundamentals.

That increases the value of someone like Aboushi, who has been far from perfect this preseason, but offers veteran experience the coaching staff can trust.

Of the young players, we see the Lions keeping Benzschawel, despite his struggles Thursday night. Prior to the stumble, he had made positive strides this offseason. He should be able to quietly develop in the background for a year without needing to contribute on Sundays.

► Thoughts: Loewen didn't play a lot against the Browns, but when he was on the field, he had an impact, completing a series of strong preseason performances to earn a spot.

As for Bryant, he's likely bound for injured reserve. Without knowing the extent of the injury, we're keeping him on the roster to start, so the team has the option to bring him back later this season. Assuming that's the case, it will free up a roster spot a day later, where the Lions can add back someone like Lee or P.J. Johnson, or potentially a waiver claim from another team's cuts. 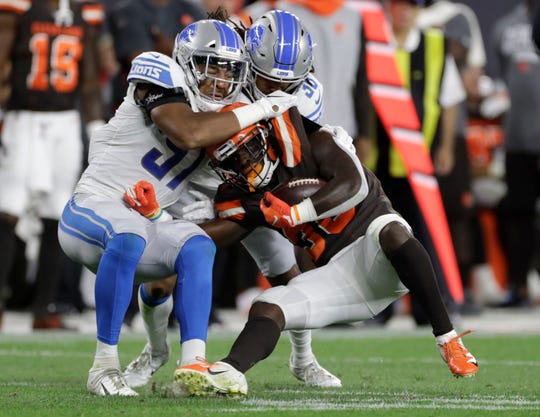 ► Thoughts: Longa was one of the toughest decisions to decipher, only because we don't know when or if he'll be able to return to his 2017 form, when he was one of the top special teams coverage players in the NFL.

The timing of his activation from the PUP list suggests the Lions weren't content to stash him away. Until he's back up to speed on the practice field, he can be one of the team's seven inactive players on game day.

As for Davis, if his recent leg injury keeps him out for any time during the regular season, the combination of Tavai and Reeves-Maybin should be a sufficient stopgap.

► Thoughts: Cutting Adams was tough, given how many plays he made throughout camp, but inconsistencies with his overall performance weaken the evaluation. He is also hurt by the team's impressive depth at the safety position. While Washington doesn't contribute anything on defense, he is too valuable of a special teams performer to let go.

If the Lions do make a trade prior to cut down, a safety seems like the position most likely to be moved.

At corner, Tabor, similar to Longa, was a tough evaluation due to injury. The third-year defensive back was making positive strides early in the offseason, but is coming off a multiple-week layoff and wasn't ready to return for the finale. We know general manager Bob Quinn's affinity for the potential, so we'll keep the former second-rounder around, for now.

► Thoughts: No surprises here. Santoso might get a somewhere, some day, but it won't be anytime soon in Detroit.