The Teez Tabor experiment in Detroit is over.

Allen Park — The Teez Tabor experiment in Detroit is over.

According to an NFL Network report, the Lions are releasing the former second-round cornerback as the team moves toward trimming its roster down to 53 players by 4 p.m. on Saturday.

The Tabor transaction isn't expected to become official until Saturday, but the Lions did formally announce a dozen cuts on Friday. 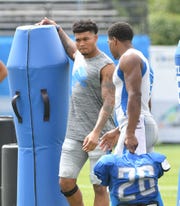 Despite concerns about his speed coming out of the University of Florida, the Lions drafted Tabor with the No. 53 pick in 2017. Speaking to reporters after making the selection, Lions general manager Bob Quinn said he probably invested more time studying Tabor's film than any other prospect in his career.

Quinn estimated he had watched 14 of Tabor's games.

"In Jalen’s case, me personally, I probably watched more tape on him than any prospect I can ever remember watching film on because everyone said he ran really slow and I said, ‘OK, well the games I watched, I didn’t see him getting run by,’” Quinn said.

With the release, it marks the earliest draft pick Quinn has made in the past four years to be removed from the roster.

But it wouldn't be fair to say the writing wasn't on the wall. After playing a limited role as a rookie, Tabor floundered in his second season, allowing a perfect passer rating on throws where he was targeted.

No one in the organization publicly criticized Tabor's commitment on the practice field or film room, expressing continued optimism. Before the offseason program began, Quinn struck that chord at the scouting combine, hoping this would be the year the young defensive back turned the corner.

"I still have faith in him,” Quinn said “We’re not giving up on him.”

Tabor started the offseason program with a string of positive performances, but optimism was held in check considering the Lions were practicing without top receivers Marvin Jones and Kenny Golladay.

An early training camp, a leg injury sidelined Tabor for three weeks. He only returned to the practice field on Monday and apparently was too far behind to catch up.

Tabor's release clears the room for another cornerback, potentially Dee Virgin or Mike Ford, to claim a roster spot.