With the open spot created by Bryant's designation, the Lions re-signed tight end Logan Thomas, who was released a day earlier. 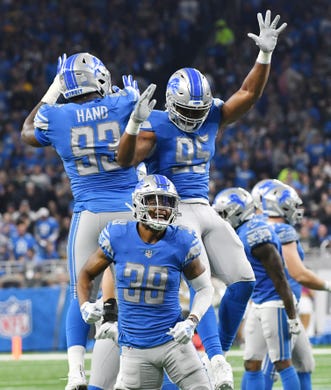 Go through the gallery as Justin Rogers of The Detroit News offers his game-by-game predictions for the 2019 Detroit Lions. Daniel Mears, Detroit News
Fullscreen 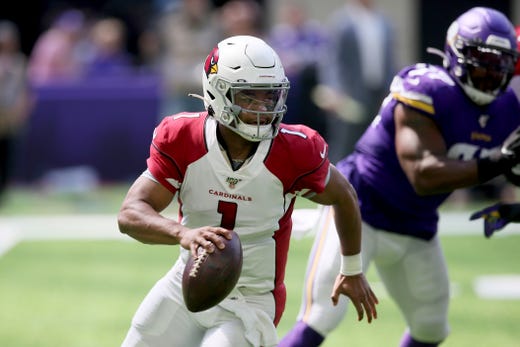 Sept. 8 at Arizona (4:25 p.m.): In a repeat from a year ago, the Lions are granted the good fortune of matching up against a rookie quarterback to open the season. The downside is that didn't go so well in 2018, when Sam Darnold and the Jets came into Ford Field and smashed the home team. Still, this year's defense appears better equipped to ruin a rookie's debut. Kyler Murray (1) is a special player, with elite mobility and a strong arm. Plus, he's been surrounded with a nice set of weapons. But if the Lions keep their edges set, they should be able to come out of this one with a hard-fought W. Pick: Lions 23, Cardinals 20 Jim Mone, Associated Press
Fullscreen 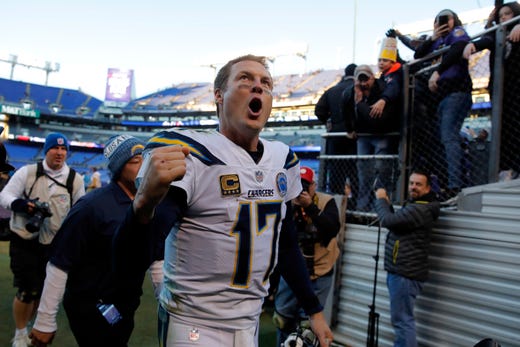 Sept. 15 vs. Los Angeles Chargers (1 p.m.): We don't know if Melvin Gordon will end his holdout before this game, but we do know stud safety Derwin James is out after suffering a foot injury this offseason. Even without Gordon and James, this is a fringe Super Bowl contender with an aging quarterback (Philip Rivers, pictured) still at the top of his game and one of the league's best pass-rushing tandems. This could, somewhat surprisingly, turn into a defensive struggle. Pick: Chargers 20, Lions 16 Carolyn Kaster, Associated Press
Fullscreen

Sept. 22 at Philadelphia (1 p.m.): The Eagles are a well-coached team with a deep roster, eyeing a return to Super Bowl contention after their first championship two years ago. The Lions are still trying to get to that level. Pick: Eagles 24, Lions 13 Butch Dill, Associated Press
Fullscreen

Sept. 29 vs. Kansas City (1 p.m.): The Lions are advertising their offense as a versatile scheme that wants to control the game on the ground, but is equally capable of relying on the pass if the matchup dictates it. But does anyone see this unit having the pieces to keep up in a track meet? The defense shouldn't have too much trouble making Kansas City one-dimensional, but that one dimension is an electric pass game that can put up points in bunches. Pick: Chiefs 30, Lions 20 Ed Zurga, Associated Press
Fullscreen 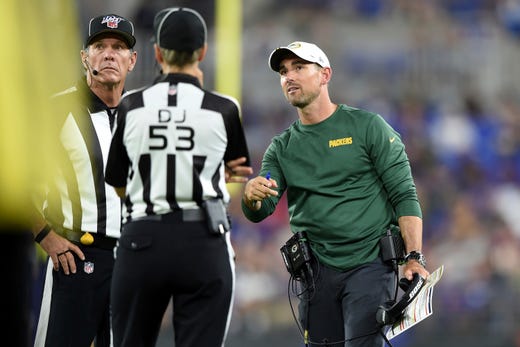 Oct. 14 at Green Bay (8:15 p.m.): The Lions aren't the only NFC North team with a new offensive scheme. Mike McCarthy is out and Sean McVay disciple Matt LaFleur (pictured) is in for the Packers. Will the first-year coach be able to better work with and maximize the talents of Aaron Rodgers? Probably. The bigger question might be whether the reloaded defense will come together and carry its weight. Regardless, a primetime game at Lambeau is not an ideal spot to come out of the bye. Pick: Packers 24, Lions 20 Gail Burton, Associated Press
Fullscreen 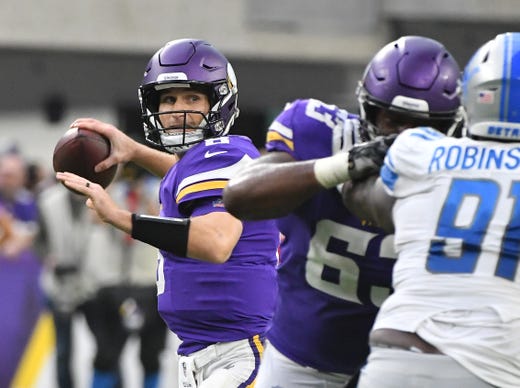 Oct. 20 vs. Minnesota (1 p.m.): Kirk Cousins (pictured) was supposed to be the piece that put the Vikings over the top, but the organization took a step back in 2018 (although they handled the Lions with ease in both matchups). If Detroit can keep the Minnesota ground game at bay, forcing Cousins to carry the offense, this will be a good opportunity to get back on the winning track. Pick: Lions 17, Vikings 16 Daniel Mears, Detroit News
Fullscreen 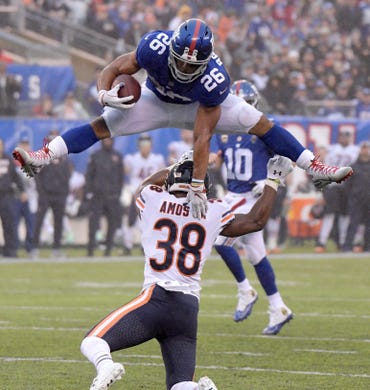 Oct. 27 vs. New York Giants (1 p.m.): The Giants are going to struggle to compete in games where they can't run the ball. As electric as Saquon Barkley (26) has been, he'll struggle to find consistent room against Detroit's defensive line, led by Damon Harrison in the middle. Pick: Lions 26, Giants 16 Bill Kostroun, Associated Press
Fullscreen 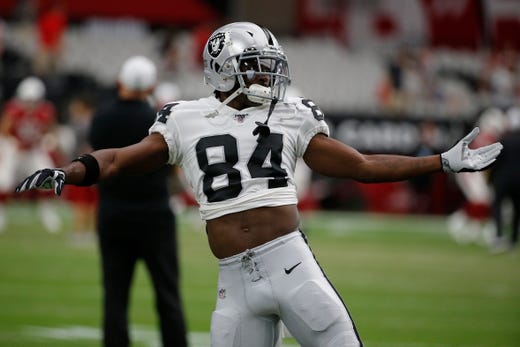 Nov. 3 at Oakland (4:05 p.m.): The Raiders weren't good at much of anything last year, putting a damper on Jon Gruden's long-awaited return to the NFL. This offseason, the team looked for quick fixes, trading for Antonio Brown (84) and inking some top free agents, but that might just be putting lipstick on a pig. Look for the Lions to keep rolling. Pick: Lions 23, Raiders 20 Rick Scuteri, Asspcoated Press
Fullscreen 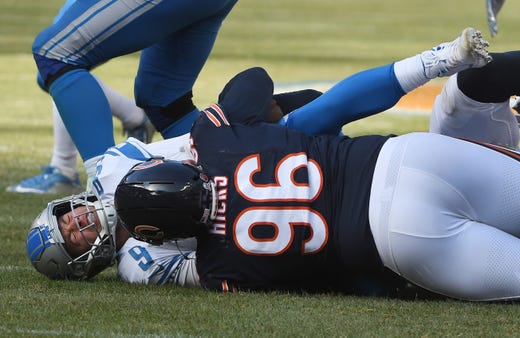 Nov. 10 at Chicago (1 p.m.): After last season, the Bears are being overrated by most. That said, where the team is unquestionably strong is up front. There might not be a better defensive line in football. It's going to be tough sledding for the Lions offense and they'll need some big plays on defense if they want to pull out a road win. Pick: Bears 17, Lions 13 Daniel Mears, Detroit News
Fullscreen 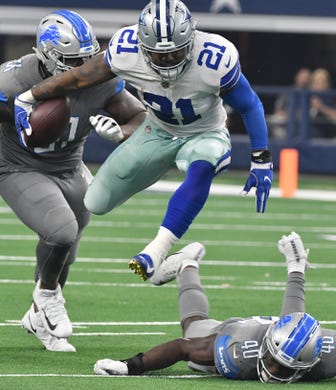 Nov. 17 vs. Dallas (1 p.m.): These two teams went toe-to-toe in Texas last year, with the Cowboys snagging a late win thanks to a deep reception by Ezekiel Elliott (21). Prior to that catch, he was a nightmare on the ground, racking up 152 rushing yards. But that was before the Lions acquired Damon Harrison, which should make a huge difference. Pick: Lions 19, Cowboys 17 Daniel Mears, Detroit News
Fullscreen 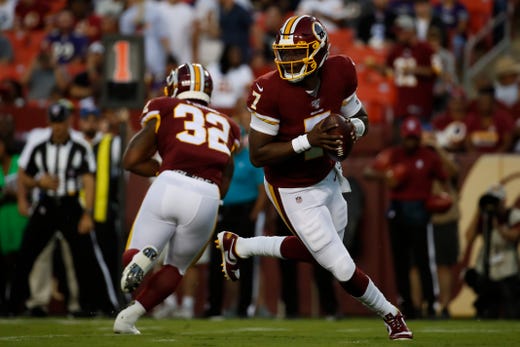 Nov. 24 at Washington (1 p.m.): Detroit might catch another rookie quarterback in Dwayne Haskins, depending how Washington's season is going to his point. Regardless, there's quite a few holes on that offense, and as long as the Lions avoid any big mistakes they should be able to squeeze out a road win. Pick: Lions 23, Washington 16 Alex Brandon, Associated Press
Fullscreen 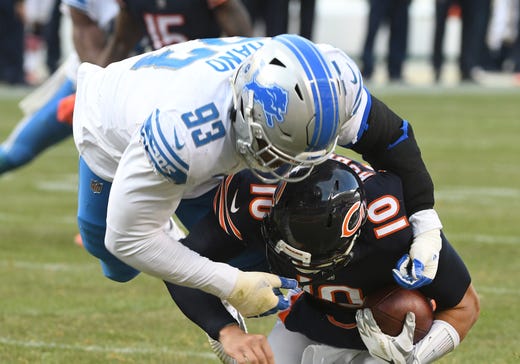 Nov. 28 vs. Chicago (12:30 p.m.): The Bears emerged victorious in the front end of the home-and-home in these projections, but the Lions get some sweet revenge on Thanksgiving, harassing Mitch Trubisky into a pair of mistakes in front of an electric home crowd. Pick: Lions 30, Bears 20 Daniel Mears, Detroit News
Fullscreen 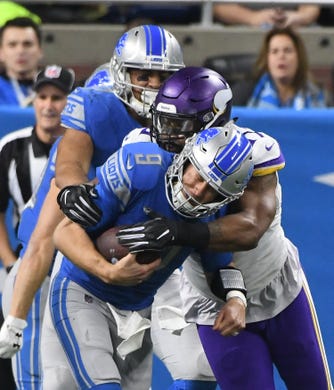 Dec. 8 at Minnesota (1 p.m.): Another Black and Blue Division split, as the Vikings avenge their loss to the Lions, thanks in large part to an old-fashioned pummeling of quarterback Matthew Stafford (9). Pick: Vikings 23, Lions 13 Daniel Mears, Detroit News
Fullscreen 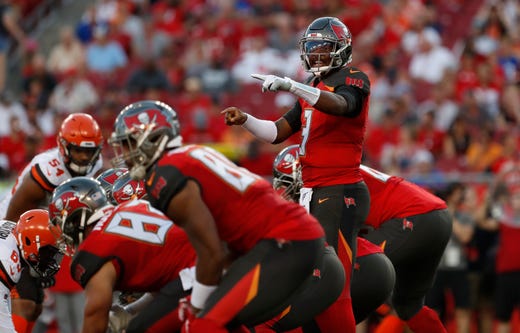 Dec. 15 vs. Tampa Bay (1 p.m.): Bruce Arians' vertical passing attack is one of the most exciting in football, but it would be a minor miracle if the Bucs' offensive line is able to play its part, giving Jameis Winston enough time in the pocket to be effective. Pick: Lions 27, Bucs 16 Mark LoMoglio, Associated Press
Fullscreen 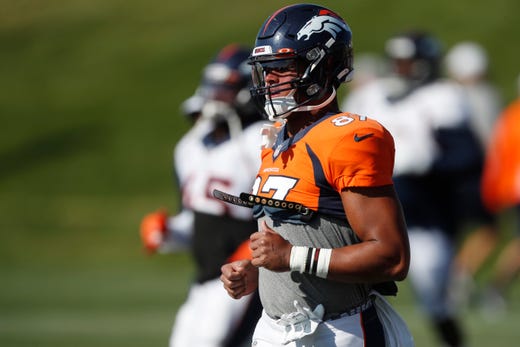 Dec. 22 at Denver (TBD): A cold-weather road trip is never easy, but coach Matt Patricia will have been preparing his team for this for two years with intense offseason conditioning and late-season outdoor practices. It wouldn't be surprising to see big plays from both rookie tight ends out of Iowa (including the Broncos' Noah Fant, pictured), but this is a game the Lions should come out on top. Pick: Lions 20, Broncos 17 David Zalubowski, Associated Press
Fullscreen 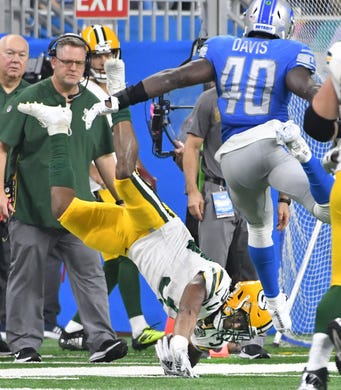 Dec. 29 vs. Green Bay (1 p.m.): We have the Lions crawling out of a 1-4 hole to start the season to having a shot to sneak into the playoffs in the season finale. Meaningful finishes haven't been a strength for this franchise, but head coach Matt Patricia's entire program is designed on getting better throughout the season. It will be put to the test here and offers a chance to validate his approach. Pick: Lions 26, Packers 24 Daniel Mears, Detroit News
Fullscreen 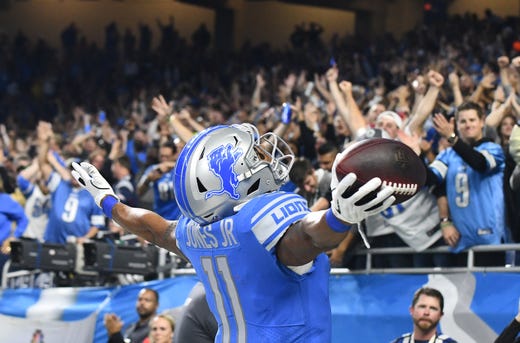 Conclusion: Last year, we had the Lions going 7-9 and they finished 6-10. There were signs throughout the offseason that pointed to struggles during Patricia's first season at the helm and that proved accurate. This year, there's a greater sense of calm throughout the organization, and although we're leaning on some significant projections given we haven't seen much of the team's new offensive scheme or upgraded defensive line, on paper, this is the most talent and depth the team has boasted since the 2014 season. Final record: 10-6 Daniel Mears, Detroit News
Fullscreen

The rookie defensive end has been out more than a month with an undisclosed upper-body injury. Prior to that, he spent the early part of the offseason program recovering from a torn pectoral muscle he suffered his final season at Clemson. 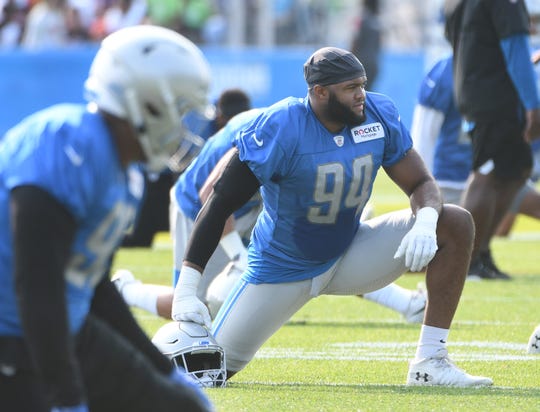 By waiting to place Bryant on injured reserve now, after the team established its 53-man roster this weekend, he's eligible to play later this season. He can return to the field as early as Detroit's Week 9 matchup against the Oakland Raiders.

"I think he showed us some really good things that he does on the field," Patricia said during a Friday conference call. "He's attentive, he works really hard, he's a consistent person in the building every single day. So there's a lot of positive there.

"The problem for us was not getting to see enough of him on the field as training camp went on. That's part of the decision-makin g we're still trying to go through, look at all the different options and all the situations we can do. But certainly someone we thought was working in the right direction"

With the open spot created by Bryant's designation, the Lions re-signed tight end Logan Thomas, who was released a day earlier to squeeze waiver claim J.D. McKissic on to the roster.