Lions' pass protection a major issue with 'relentless' Chargers up next

The Detroit Lions have invested copious resources in their offensive line, and to date, the unit is still not paying dividends on that investment.

Lions' pass protection a major issue with 'relentless' Chargers up next 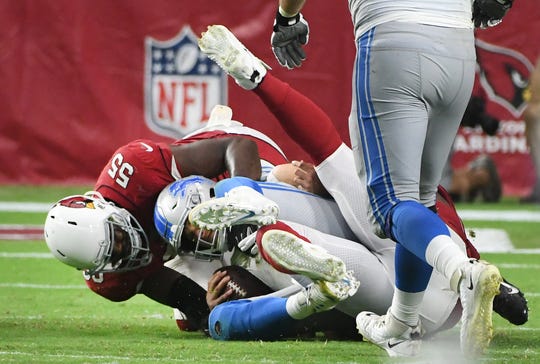 Allen Park — The Detroit Lions have invested copious resources in their offensive line, and to date, the unit is still not paying dividends on that investment.

Despite a modicum of improvement in 2018 — when the ground game finally managed to average more than 4.0 yards per carry — the overall performance was still below-average. And things are off to a disastrous start this year.

Pass-rush pressure is a subjective measure in football, but regardless of the various sources that attempt to measure it, the Lions were awful against the Arizona Cardinals in a season-opening tie. Quarterback Matthew Stafford was under duress the entire afternoon — sacked, hit or prematurely moved off his spot on 22 of his drop-backs, according to Pro Football Focus. That was the most in the NFL, by count, and second worst by percentage to Houston.

And the run game wasn't that much better, averaging 3.6 yards per carry and getting stuffed on multiple third-and-short situations.

Some of the biggest problems were free rushers — unblocked defenders lost in the shuffle. That's indicative of communication woes that shouldn't be this poor in the second year under position coach Jeff Davidson.

"It’s something that we have to get cleaned up, definitely," offensive coordinator Darrell Bevell said. "But as you go through the preseason and the practice time – it’s the first time they’re out there for extended periods of time, and making sure that we continue to communicate throughout, but those are definitely things that as we keep going forward that will get cleaned up and we can clean up. We have to make sure that that happens."

Lions coach Matt Patricia often talks about the importance of the offensive line viewing each play through the same set of eyes, but the team has complicated that process by rotating out starting guards Joe Dahl and Graham Glasgow for Kenny Wiggins, potentially hindering the building of chemistry among the starting group.

Dahl, who earned the starting left guard job with a stellar training camp, was the surprising bright spot coming out of Week 1. Among the starting five, he was the only one to not allow pressure to a pass-rusher.

Meanwhile, limiting damages from the edges proved problematic as both tackles, Taylor Decker and Rick Wagner, struggled with the Cardinals' dangerous pass rush. Pro Football Focus had each allowing seven pressures, which tied for the most of any offensive lineman in Week 1. 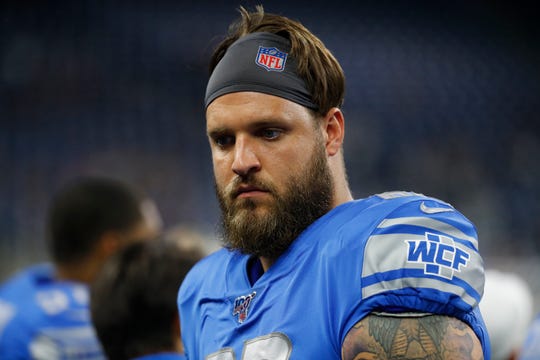 Decker, a former first-round pick is entering his fourth season. Wagner, one of the highest-paid right tackles in football, is a seven-year vet in his third year with the Lions. The performance isn't matching the investment.

And things aren't going to get easier for the two this week with Chargers defensive end tandem Joey Bosa and Melvin Ingram coming to town. They're both among the best at the league at getting to opposing quarterbacks.

"Those guys, they’re relentless," Chargers coach Anthony Lynn said. "What they’ve done is they’ve shown some versatility to play inside and outside. (They are) starting to do that a little more, but you also need those two guys inside to do their job so those guys can be effective."

Ingram and Bosa each recorded a sack in the Chargers' Week 1 victory over Indianapolis. In 2018, Ingram registered 64 pressures, good for 13th in the NFL, while Bosa was equally effective, generating 28 pressures in seven games.

"They present quite a problem," Bevell said. "Bosa and Ingram are great athletes. I think the thing that impresses me is their motor. I mean they go and go and go and they continue to get after the quarterback. They also move them around, so they are not as easy to find, just in terms of some of the schemes that you might try to use against them. That’s definitely a big challenge for us this week, and making sure we handle those two guys.”