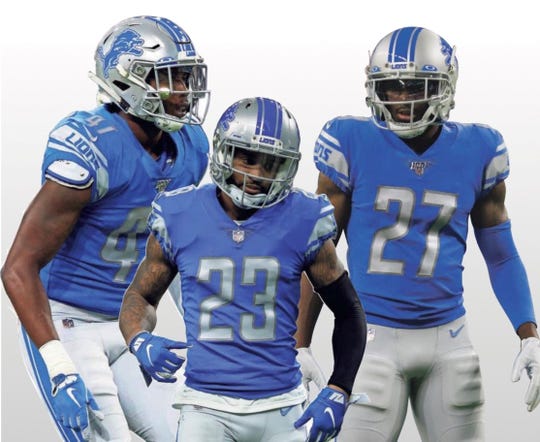 Allen Park — If the Lions are going to have any chance of slowing down Philip Rivers, Carson Wentz, Patrick Mahomes and Aaron Rodgers in the coming month, “The Wick” is going to have to shine bright.

Brunswick, Georgia, that is, which is inexplicably the home for three of the Lions’ five starting defensive backs: Darius Slay, Justin Coleman and Tracy Walker are all former Brunswick High School Pirates.

“It’s amazing, to be honest,” Coleman said last week. “Overall, I consider every guy in here like somebody I grew up with. But at the end of the day, these guys I actually grew up with and they understand where I’m coming from.”

Brunswick has a population of 16,357, with the Golden Isles metro area made up of more like 100,000 people — think Traverse City summers with shrimp boats.

Like Traverse City, the Golden Isles rely on tourism, often the high-end kind. But in north Brunswick, where Slay, Coleman and Walker are from, dreams of anything like the fame and fortune afforded to NFL players seemed so far away.

“Coming from the circumstances we were in, we feel like we accomplished so much more than a lot of people can accomplish by making it out of Brunswick,” Coleman said.

Walker added: “A lot of people didn’t want to see us make it out. It is what it is.”

The winless, undefeated Lions return home after a disappointing tie in Arizona to battle the Chargers. We take a look at the matchup. The Detroit News

Producing professional athletes was nothing new to the region, but the trio is part of only five players to make the NFL from Brunswick High, which counts Jarrad Davis’ alma mater of Camden County, about 30 miles south of Brunswick, as a rival.

Brunswick’s primary crosstown rival, Glynn Academy, claims St. Louis Cardinals pitcher Adam Wainwright, who closed out the Tigers in the 2006 World Series, and Kwame Brown, a former Piston who once was the first high schooler picked No. 1 in the NBA Draft, as its most famous alums.

Davis Love III grew up in Brunswick and is a booster for the bustling golf community — nearby St. Simons Island hosts a PGA Tour event, the RSM Classic — and current pros make their homes on the coast.

But make no mistake about it, south Georgia is a football area, with near unanimous support for the Georgia Bulldogs, and a split between the Atlanta Falcons and Jacksonville Jaguars for the hearts of NFL fans.

The Lions are now seeping into The Wick’s sports consciousness as the three native sons blossom together.

“It’s crazy, kind of surreal, hard to actually believe,” said Kevin Price, who covered the players at Brunswick as a journalist and now chronicles the area’s sports history with the Glynn County Sports Hall of Fame.

In high school, each player was two grades apart, with the oldest Slay missing his cousin Walker, the youngest, by one year.

“Darius always had glaring talent because of his speed,” said Floyd, now a high school coach in South Carolina. “When I got there, they had him playing running back and corner. I moved him to receiver because we were going to run around and throw it in space.”

Coleman was a track and field star who Floyd said never lost a football practice sprint — even against Slay.

“He has a little something different inside when it comes to competing,” Floyd said, noting that Butch Jones, Coleman’s college coach at Tennessee, told him Coleman didn’t lose a match during offseason martial arts combat training in Knoxville. “He always had an itch to compete.”

Brunswick basketball coach Chris Turner said that he couldn’t get Coleman to scratch that itch on the hardwood, though, as he was the only one of the trio to not play basketball.

“I can remember, he comes in the gym, and I’m like, ‘Who is the kid?’” Turner recalled. “He reaches down with one hand and just jumps up, straight vertical leap, and he dunks the ball backward. But we could never get him to play.”

Slay helped the Pirates basketball team to a Sweet 16 appearance, while Walker fancied himself as a basketball player until Floyd finally got him out for football as a junior.

“He didn’t want any part of football,” Floyd said. “He wanted the easy route, he wanted to play basketball. I thought that would be a quick route for him to get to college ball because he had great length and speed. He finally came out, got better and better.”

Slay said Floyd had a particularly impactful presence on him in high school, and he brought his former coach and his son to the Pro Bowl in 2018.

The Lions drafted Slay in the second round of the 2013 NFL Draft out of Mississippi State and he’s blossomed into one of the game’s best, with his 92 total pass defenses leading the league during his career. Walker was added as a surprise third-round pick out of Louisiana-Lafayette in 2018, and Coleman made it a triple Wick this offseason as a free agent.

Slay and Walker were coached in college by Melvin Smith, who was Slay’s defensive backs coach and then went to Lafayette as defensive coordinator.

Walker, wearing his new No. 21 in part to honor his favorite player Sean Taylor, made an interception, led the team with nine tackles and played every defensive snap in the season opener.

The trio acts more like brothers in the locker room, carrying things over to the meetings where old gripes still get brought up, like how Slay still goads Coleman for dropping the baton at the state track and field meet as Brunswick was trying to repeat its 400-meter relay title from the previous year.

They also can argue like brothers. Walker and Slay were asked last week who the best basketball player is of the trio.

“He knows,” Slay said, while Walker countered that “he’d get whooped on.”

“It’s just with us growing up, always competing and being in competition with everybody.”