Justin Rogers, John Niyo and Bob Wojnowski of The Detroit News offer their predictions on the outcome of Sunday’s Lions vs. Eagles game.

Justin Rogers and John Niyo of The Detroit News discuss the Lions' upcoming game against the banged-up Eagles and what it will take to come out with a victory. The Detroit News

Justin Rogers, John Niyo and Bob Wojnowski of The Detroit News offer their predictions on the outcome of Sunday’s Lions vs. Eagles game at Lincoln Financial Field in Philadelphia (1 p.m., Fox/760). 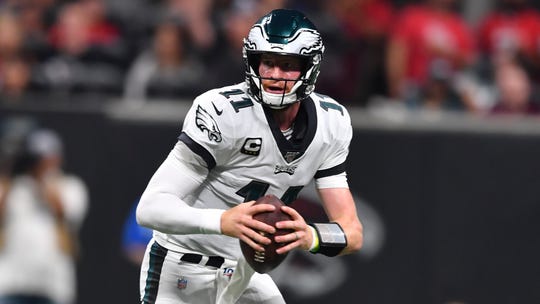 ► Justin Rogers: It's tough to win in Philadelphia, but the Eagles are so banged up that I can't pick against the much healthier Lions. Lions 20, Eagles 17

► John Niyo: Can the Lions take advantage of the Eagles' injuries? They will if they can handle Philadelphia's defensive front, which isn't what it once was and has forced Jim Schwartz to gamble with more blitzes. Matthew Stafford got the ball out much quicker in Week 2, and it's up to Darrell Bevell to make sure he does again this week. If he does, the Lions can escape with another upset. Lions 23, Eagles 17

► Bob Wojnowski: Tough environment, tough opponent, but the Lions could be catching the Eagles at the right time. Philadelphia is battered and might be missing several offensive weapons. That means lots of Carson Wentz passes to tight end Zach Ertz, and that means the Lions’ touted defensive line needs to crank up the pressure. Former Lions coach Jim Schwartz will dial up plenty of blitzes, and if Matthew Stafford handles them, an upset is possible. Eagles 21, Lions 20

Lions at Eagles: View from the other side

Report: Calvin Johnson says Lions 'wanted me to change my story' about concussion

Lions turn to 'explosive' Paul Perkins for next Giant contribution