Problems lie on both sides of the ball so far this season for the Lions, who have battled through for a 2-0-1 record. 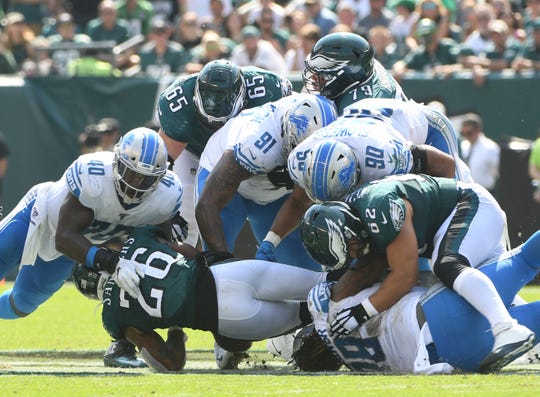 The Lions are 22nd in the league in run defense, allowing an average of 125.3 yards per game. (Photo: Daniel Mears, Detroit News)

Allen Park — When Matt Patricia was asked about run deficiencies for his team this week, the coach had to follow up with the questioner for clarity.

“What side?” the Lions coach asked Monday, earnestly. “We’re trying to make a lot of corrections.”

For a team built largely on Patricia’s grind-it-out image, the numbers don’t fit the offseason narrative: The Lions, despite a strong 2-0-1 start on the scoreboard, are 18th league-wide in rushing offense and 22nd in stopping the run.

Players from both line units are optimistic a breakout is on the way.

“I think we all battled out there,” guard Joe Dahl said Monday. “The main thing with the run game is we’re just so close. I think moving forward it gives us confidence, but we’ve got to just keep working on our fundamentals and just know that we’re going to start hitting them.”

Heading into Sunday's game against Super Bowl contender Kansas City (3-0), the Lions have compiled 98.7 rushing yards per game and are allowing 125.3 yards per game on the ground.

The rushing offense was buoyed by a 44-yard reverse play to J.D. McKissic in last Sunday's 27-24 win at Philadelphia, which accounted for more than half of Detroit’s 86-yard rushing output.

Johnson’s 126 rushing yards rank 34th in the league — eight teams have two players better than Johnson and a quarterback (Lamar Jackson of Baltimore, 18th, 17 yards) ranks ahead of the second-year back.

According to the NFL’s Next Gen stats, Johnson ranks third in the NFL in percentage of defenses faced with at least eight men in the box with 45.8%. First on the list is C.J. Anderson, who faced such defenses 68.8% of the time before getting released after two games with Detroit, gaining 43 yards on 16 attempts.

“The run game is going to be a part of us, we’re on record saying that,” offensive coordinator Darrell Bevell said. “What I really feel like is we’re just one guy away. I feel like there’s been a lot of instances where we’ve had 10 out of 11 doing the thing we need them to do. If we can just get that one last little piece fit in there, it’s going to start going.”

To the offensive line’s credit, quarterback Matthew Stafford has taken less of a pounding than previous seasons. Sunday was the second straight game he was not sacked and the Lions’ three sacks allowed is tied for fourth-best in the league.

Perhaps more disappointing is the lack of production on the defensive line, especially considering the offseason investments in free agent end Trey Flowers and tackle Mike Daniels — who suffered a foot injury on Sunday — and the contract extension given to tackle Damon Harrison.

Despite tying his career-high eight tackles, a sack and a tackle for a loss, Flowers said he could have done more.

“My play? I did alright, but I left a lot out there,” Flowers said, before repeating his most oft-used phrase: “I’m working.”

About the last thing the Lions need against the Chiefs is more ground futility. With precious attention needed to stop quarterback Patrick Mahomes in the passing game, the line must try to bottle up backs LeSean McCoy and Damien Williams without much help.

“I have to coach it better,” Patricia said. “I have to improve the techniques and the pad level overall is just something that we consistently have to keep the point of emphasis on.”

The deficiencies almost hurt the Lions in a major way on Sunday. In an attempt to hold on to the ball late, offensive coordinator Darrell Bevell called upon the run attack.

In three possessions after taking a 27-17 lead on the first play of the fourth quarter, the Lions rushed the ball seven times for 1 yard.

“I think the run game on both sides is something that we’re always talking about early in the season and trying to improve it as we go, and just trying to get consistency with it,” Patricia said. “I would say that’s probably the biggest thing.”