Through three games, the Lions have batted down six throws at the line of scrimmage. Only the Buffalo Bills have had more. 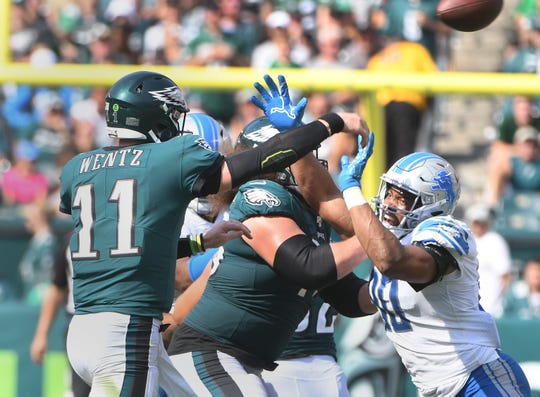 Allen Park — It's not a sack, and it's not a loss of yardage, but a batted pass at the line of scrimmage is a pretty good result for a defensive line. It's a wasted play for the offense, and, sooner than later, one of those deflections is likely to turn into a turnover.

There's an art to batting passes. A player needs to understand when his rush has stalled while keeping eyes in the backfield. And if you've watched the Detroit Lions this year, you know they've been aggressive about getting their hands into the passing lanes of opposing quarterbacks.

Through three games, the Lions have batted down six throws at the line of scrimmage. Only the Buffalo Bills have had more. What's more, the Lions have already have doubled their total from a season ago, when they knocked down only three passes.

"I think Bo Davis, our defensive line coach, and Al Golden, our linebackers coach, do an excellent job of trying to coach the guys on getting a hand up in passing lanes," defensive coordinator Paul Pasqualoni said. "That’s something that we’ve worked on. ...So far this year, we’ve gotten our hands on a few. We just hope that trend can continue.”

And there's reason for optimism on that front.

The team leader, Damon Harrison, is also leading the league with three bat downs. A prolific run stopper, Harrison knows how to keep his eyes in the backfield when fighting through multiple blockers, so this is a logical progression in his game.

Meanwhile, A'Shawn Robinson, who has long had a knack for the skill — twice finishing in the top 10 in the stat during his first three pro seasons — has yet to get his mitts on a throw in 2019.

This week's opponent, Patrick Mahomes, has had just one pass batted down through three games. During his MVP season in 2018, he had 10 rejected at the line, tied for the eighth most in the league.