For the first time since the start of the season, the Detroit Lions had a player on the active roster miss practice. 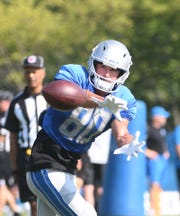 Allen Park — For the first time since the start of the season, the Detroit Lions had a player on the active roster miss practice as both defensive tackle Mike Daniels and wide receiver Danny Amendola sat out on Wednesday.

Daniels suffered a right foot injury in the first quarter of Detroit's 27-24 victory over the Philadelphia Eagles on Sunday, while Amendola was injured late in the game when he landed hard on his left shoulder making a diving catch near the sideline.

The rest of the team was on the field during the portion of practice open to the media, including cornerback Darius Slay. The caveat is Slay wasn't doing much of consequence, putting no strain on the hamstring he injured in the third quarter against the Eagles.

Hand has yet to play in a game this season while recovering from a training camp elbow injury. Melvin has been one of the most reliable members of Detroit's defensive backfield, despite playing through a knee injury that's limited him in practice since the start of the season.