Justin Rogers, John Niyo and Bob Wojnowski of The Detroit News offer their predictions on the outcome of Sunday’s Lions vs. Chiefs game. 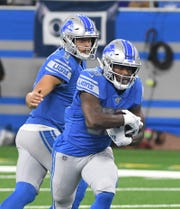 Justin Rogers, John Niyo and Bob Wojnowski of The Detroit News offer their predictions on the outcome of Sunday’s Lions vs. Chiefs game at Ford Field (1 p.m., Fox/760).

►Justin Rogers: The Lions won't be able to stop Kansas City's offense, but should be able to draw up a plan good enough to slow them. That should keep things close, but not close enough. Chiefs 27, Lions 23

►John Niyo: The Lions' secondary has held up pretty well the last couple weeks. The Chiefs are a different challenge altogether, though. And it's crazy to think Patrick Mahomes & Co. have put up the numbers they have without ever playing in a dome. Sunday marks his regular-season debut indoors. Chiefs 34, Lions 24

►Bob Wojnowski: The Lions have found ways to win but they can’t play ugly and expect to pull this one out. The Chiefs are pretty much unstoppable, scoring at last 26 points every game that Patrick Mahomes has started. They score even with key players sidelined, including Tyreek Hill. I doubt the Lions can win a shootout, so they’d better win the battle up front with their defensive line, and get Kerryon Johnson and the running game going. They’ll keep it close, for a while. Chiefs 30, Lions 20