It's been four years since the Detroit Lions released wide receiver Ryan Broyles. 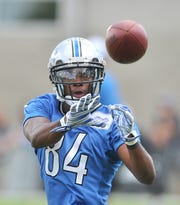 Allen Park — It's been four years since the Detroit Lions released wide receiver Ryan Broyles, and he hasn't appeared in a professional football game since he was cut. But that might be changing in the near future. The former second-round pick out of Oklahoma has been listed as part of the XFL's draft pool.

Broyles was one of several players featured on the startup league's announcement. The draft, which will be conducted Oct. 15-16, will help establish 71-man rosters for each of the eight teams.

One of the most productive receivers in college football history, the Lions selected Broyles with the No. 54 pick in the 2012 draft. After suffering an ACL tear to end his college career, he continued to battle significant injuries during his short time with the Lions, including tearing his other ACL and rupturing his Achilles tendon.

In total, he appeared in 21 games over three seasons, catching 32 passes for 420 yards and two touchdowns.