Lions have no plans to discontinue guard rotation

Lions have no plans to discontinue guard rotation 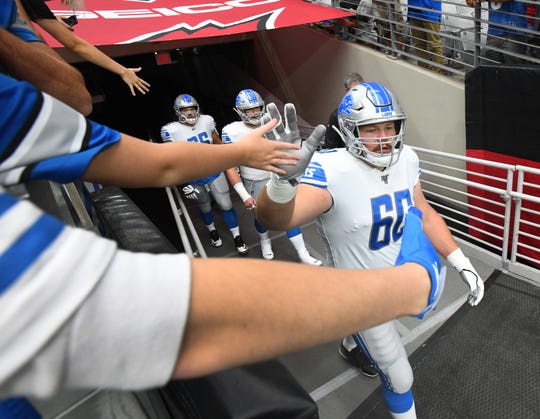 Allen Park — Since the start of the season, the Detroit Lions have deployed a guard rotation, subbing out starters Graham Glasgow and Joe Dahl one series each, each half, in favor of backup Kenny Wiggins.

It's a curious strategy, particularly with pulling Glasgow off the field. The fourth-year lineman has been an iron man the past two seasons, playing nearly every offensive snap for the Lions. And he also continues to play at a high level. Pro Football Focus grades him as the fifth-best player at the position in 2019.

When asked about the rotation earlier this offseason, Lions coach Matt Patricia said the coaching staff felt like Wiggins earned playing time. That continues to be the case and the coach said there's no plans to change things up.

“I think so far, we felt, offensively, that that’s been good for us from that aspect of it," Patricia said. "We just want to stay with it. Thought it has been a healthy thing to be able to give some rotation in there and give some different looks. Certainly, I think it’s always tough for the defensive line when they have to handle somebody new in there. ...I think when you kind of keep that moving, it maybe changes some things that they do also.”

Dahl is the only one of the three players under contract beyond this season, having signed a two-year extension during training camp. On the surface, it would appear Glasgow would be a top priorities for the Lions to re-sign this offseason, but, to date, there has not been any indication the two sides have been close on an extension.

Glasgow has always stated publicly he'll always do what the coaches ask of him, but it's conceivable being rotated off the field could negatively impact his desire to stay with the Lions beyond 2019.

It was a disappointing end to a disappointing game, but Patricia didn't like to see the way his defense handled itself in the closing minutes of Sunday's loss to the Minnesota Vikings.

Twice, after the Vikings took a knee, there was post-whistle shoving matches between the two teams. On the second round, defensive tackle A'Shawn Robinson was flagged for unsportsmanlike conduct.

Had Robinson not been flagged, the Vikings would have been forced to punt the ball back to the Lions with approximately 20 seconds remaining.

"Certainly, there is no place for that in the game," Patricia said. "We were trying to do something there from a calculated, time-management standpoint, and it hurt that situation. For us, that’s the number-one thing because we’re trying to do everything we can to win. Even though the odds may seem long, we’re going to go through the process and do everything possible to compete.

"We just have to keep a cool head there and do things the right way and do them smart," Patricia said. "We addressed that. Certainly, we can’t have those penalties. That’s number one. We have to stay poised.”

Robinson could see a fine for his actions. The collectively bargained fine for a first unsportsmanlike conduct is $14,037.