Of all the tight ends the Lions play this year, none present the unique test Evan Engram will this Sunday, because none possess his speed.

The Lions have lost three straight and just traded starting safety Quandre Diggs. Lose another and the wheels might come off the bus. The Detroit News

Allen Park — The Detroit Lions have and will continue to face a challenging slate of tight ends this season, already seeing Travis Kelce and Zach Ertz, two of the three players to receive All-Pro votes at the position a year ago.

The Lions did dodge a bullet in Week 2, missing Hunter Henry due to an injury when the Chargers came to town. No tight end is averaging more yards per game this season. But Oakland's Darren Waller is close, and he's on deck next week, when the Lions travel west to play the Raiders. 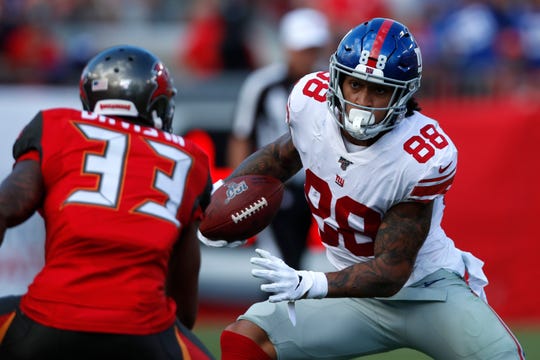 But of all the tight ends the Lions play this year, none present the unique test Evan Engram will this Sunday, because none possess his speed.

In the past 15 years, only two tight ends have run a faster 40-yard dash than Engram did at the league's scouting combine — 14-year vet Vernon Davis and former Lion Dorin Dickerson. Even with the pads on, Engram has jets. No tight end has been clocked at a higher top speed this season by the NFL's Next Generation Stats than his 20.84 mph.

Engram recently missed a game with a knee sprain, but he returned last week against Arizona and struggled. Drawing a number of different coverage assignments, including speedy linebacker Haason Reddick and All-Pro cornerback Patrick Peterson, Engram was held to one catch for six yards, the second-lowest output of his six-year career.

He'll be looking to bounce back against a Lions team that has found a way to hold opposing tight ends in check. Kelce managed 85 yards against Detroit, but was kept out of the end zone.The same goes for Ertz, who caught four balls for 64 yards and no touchdowns.

And while the Lions are no stranger to mixing and matching their coverages, much like the Cardinals did against Engram, the bulk the man-coverage responsibilities of tight ends has fallen on the shoulders of second-year safety Tracy Walker. It helps that he has the size and speed combination to adequately handle the role.

"He's definitely athletic," Walker said about Engram. "He's a great receiver. He's physical. He's a dynamic, elite guy. He's as good as any tight end in the league. He's one of the top five. I just have to come with the same approach, understand that everybody has skill sets their great at and everybody has weaknesses."

While there's no guarantee the Lions stick with the strategy against the Giants — especially considering Walker might be moved to his more natural position of free safety after Quandre Diggs was traded to Seattle earlier this week — Walker's words hint he'll get the draw again.

He was asked what he needs to do to counter Engram's world-class speed.

"I tell you what, when Sunday comes, I'm going to show you," Walker said.