Tate has been targeted 26 times by Jones over the past three games — 10 more than anyone else on the team.

The Lions have lost three straight and just traded starting safety Quandre Diggs. Lose another and the wheels might come off the bus. The Detroit News

Allen Park — Matthew Stafford was already putting up big numbers when Golden Tate arrived in Detroit for the 2014 season.

But with the reliable wide receiver aboard, the quarterback made 99 connections with Tate that first season, lifting both to the only Pro Bowl appearances of their careers and the best Detroit season of the Stafford era.

Now with the New York Giants as a leader of a young locker room, Tate looks back fondly on his time with Stafford, a fellow 31-year-old veteran.

Tate said over the summer that Stafford is the “best quarterback I’ve played with,” a comment that made headlines as a perceived slight to Russell Wilson, a Super Bowl champ who made two of his five Pro Bowls in the pair of Seattle seasons he teamed with Tate.

When asked by reporters this week about any extra emotions heading to Detroit on Sunday, Tate deflected.

“I don’t want to make this about me. I just want to go back there and win any way possible.”

In three games since serving a four-game PED suspension, Tate has been targeted 26 times by Giants rookie quarterback Daniel Jones — 10 more than anyone else on the team.

It mirrors Stafford’s reliance on Tate in their four-plus seasons together. 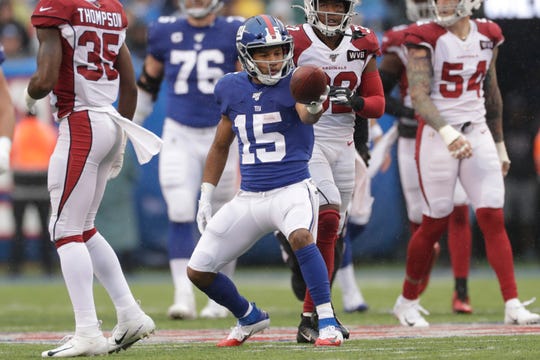 Golden Tate (15) has 15 catches for 195 yards and one touchdown in three games with the Giants this season. (Photo: Adam Hunger, Associated Press)

Stafford, who became the fastest player ever to 40,000 career passing yards last week against Minnesota, connected with Tate 411 times for 4,695 yards in his career, second only to Calvin Johnson. Marvin Jones Jr. passed Tate for second on Stafford’s touchdown list with Sunday's four-touchdown outing.

“He’s a guy that can turn a short one into a long one really quick, which is nice as a quarterback to be able to once every two or three games throw an 8-yard pass that goes for 40,” said Stafford, who would pass Joe Montana for 19th on the all-time list with 275 yards this weekend.

“That feels pretty good, it kind of puts a little bit of wind in the sails.”

Tate has credited Stafford for much of his success as the self-proclaimed “YAC King,” detailing how the quarterback finds him in precise spots that allow him to get it and go pile up yards after a catch.

The Notre Dame product is pictured on the cover of this week's New York game notes for the media, noting Tate is 91 yards short of 7,500 for his career.

Jones could use a boost, as the surprise sixth overall pick of the draft has struggled in three straight losses after winning his first two starts. Both the Lions (2-3-1) and Giants (2-5) are trying to break three-game skids at Ford Field.

Sunday’s matchup has a bit of irony attached as it will be three days short of exactly one year since Tate was traded to Philadelphia in a move that surprised Lions' fans and players alike.

The organization pulled another surprise this week, trading safety Quandre Diggs on Tuesday to Seattle — where Tate began his NFL career.

While Tate, Stafford and the Lions sputtered in the first round of the playoffs at Dallas during the 2014 season, Seattle and current Lions offensive coordinator Darrell Bevell advanced to the Super Bowl to face Matt Patricia and New England.

Safety Tavon Wilson, a member of the Patriots championship team that year, is one of the players expected to step up in Diggs’ absence.

“It’s exciting for us. You get an opportunity to go against a teammate that’s a good friend and a good player,” Wilson said of trying to slow Tate. “I’m sure he’ll be juiced up on Sunday and we’ll be juiced up, too.”