It’s almost like Austin Bryant is trying out for the Lions all over again. 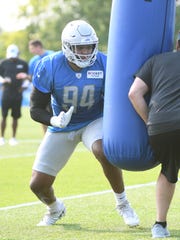 Allen Park — Detroit Lions rookie fourth-round pick Austin Bryant returned to practice Wednesday for the first time since training camp, and it’s almost like he’s trying out for the team all over again.

On injured reserve with an injured pectoral muscle until at least next week, the defensive lineman has to prove to the coaching staff that he can contribute to a floundering defense, admitting there was rust on day one.

“I’ve got to go out there and prove that I can help this team win the rest of the year,” Bryant said. “If I can, then I’ll be out there. If I can’t, then I won’t. I just got to do my part, and whatever they decide, that’s what I’m going to do.”

The Lions have a 21-day window over the next six weeks to evaluate Bryant and see if they want to activate him off injured reserve. It’s unclear where exactly he’ll fit in the defense, but he was billed in the draft process as a potential edge rusher or hybrid lineman and linebacker.

Bryant, who played through a pectoral injury last season at Clemson and then suffered what he said was a different injury to the muscle in training camp, will watch Clelin Ferrell take on his new team Sunday in Oakland.

Ferrell, the fourth pick of the draft, was part of a monster defensive line with Bryant that led Clemson to the national championship. Ferrell has 11 tackles and a sack this season.

Fellow Clemson defensive line draftees Christian Wilkins, the 13th pick by Miami, and Dexter Lawrence, the 17th pick by the Giants, have enjoyed productive seasons, while Bryant has had to sit and wait.

“I don’t think I’ll forget this experience that I’ve had,” Bryant said. “God willing, everything goes smooth in the future. But man, I’ll never forget having to be patient.”

Back when Ferrell and Bryant were drafted, they had a Twitter exchange circling Nov. 3 on the calendar, vowing to exchange jerseys after the game.

That won’t happen, but maybe soon Bryant will don his No. 94 in game action for the Lions.

“I’ve got fresh legs, I was able to learn as much as I could from the older guys and the coaches, hitting all the books, so that was really helpful,” Bryant said. “The training staff has done a good job to where I feel confident in it. So I’m really pleased with where I was at today, hopefully I can continue to build on it the next couple weeks."