For several years now, including the start of this season, safety had been a spot of stability and depth for the Detroit Lions.

Allen Park — For several years now, including the start of this season, safety had been a spot of stability and depth for the Detroit Lions. That's been flipped on its head this year, first with the release and subsequent retirement of Glover Quin, followed by the surprising shipping out of Quandre Diggs near the trade deadline.

Suddenly, that room was young and relatively inexperienced, except for the last veteran standing, Tavon Wilson. 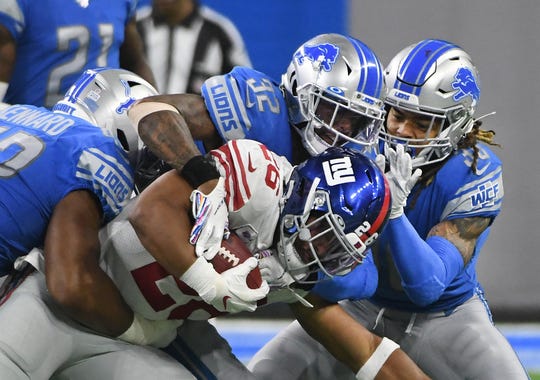 Wilson was one of general manager Bob Quinn's first signings when he took the job in 2016. A former second-round draft pick for New England, Wilson never really found his footing with the Patriots, but the first-time GM saw the opportunity to bring in a low-cost veteran with a versatile skill set and an understanding of the culture that made the Patriots so successful.

A starter his first two years in Detroit, Wilson conceded that role to Diggs after a season-ending shoulder injury in 2017, but regained it after Diggs was traded to the Seahawks.  And in a year where the Lions defense has been one disappointment after another, Wilson has quietly been one of the unit's bright spots.

Lions coach Matt Patricia served as Wilson's defensive coordinator in New England the safety's first four seasons and inherited him for a second stint together when he took the job in Detroit in 2018.

"Tavon has a lot of really good attributes that he’s always had," Patricia said. "His football instincts are phenomenal. Some of the things that he’s really learned to do closer to the line of scrimmage, I would say his football IQ just basically keeps improving every single year.

"One of the things that’s more impressive about him is his ability to play multiple roles in a game," Patricia continued. "He plays a lot of different positions at times. He’ll be in a lot of different spots and he gets lined up, makes very few mistakes, just really can handle all of that at a high level. (He can) not only do that, but also communicate to those around him what he needs to and what they need to do to help. That conceptual learning mentality is something that he has mastered, and it just allows him to be that much more flexible, but also to help everybody around him in the process, which is huge for a defense."

In recent weeks, Wilson has spent a great deal of time closer to the line of scrimmage. Against the Chicago Bears on Sunday, when the Lions substituted linebacker Jarrad Davis off the field for a series each half, the 208-pound Wilson essentially acted as a second linebacker, working next to rookie Jahlani Tavai.

Wilson credits some of that positional flexibility to playing multiple spots in his formative years, including quarterback and nose tackle.

"I was bigger than everybody growing up, so I was pretty good at it," Wilson said. "I was a stand-up nose tackle, too. I was standing over the center and he was in his stance, and I was bigger than him, too." 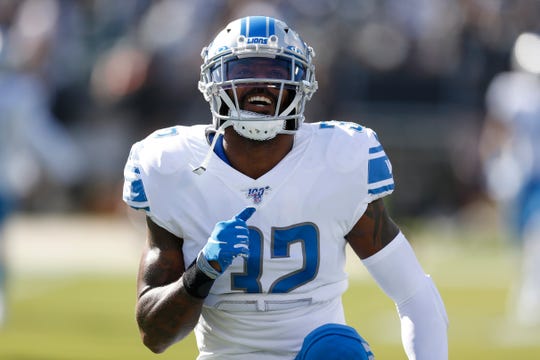 Wilson's IQ and experience have made him the de facto at safety, where the Lions have been running thin in recent weeks. With starter Tracy Walker set to miss his third straight game with a knee injury, the team has leaned heavily on a pair of rookies, third-rounder Will Harris and undrafted free agent C.J. Moore.

"I think those guys do a great job preparing," Wilson said. "They’re professionals, as well. I give them their space as if they’re going to be prepared. Obviously I’m going to be there for them in any type of way that I can. That’s during the week and on game day. Those guys have done a really good job coming in, stepping in, in their first year, doing everything they can to give us a chance at winning."

Wilson said the key to a young player adapting to the NFL is a willingness to work. But he's always ready to offer insight when they have questions, just like Jason McCourty, Patrick Chung and Steven Gregory — now a position coach with the Lions — did for him when he was a young player in New England.

"We spend a lot of time together, trying to make sure those guys are comfortable," Wilson said. "And if they aren’t comfortable, it's what can I do to help make them comfortable? They’ve been very open. Honestly, they haven’t been uncomfortable in too many situations. Those guys have been playing big."

Harris, who has stepped into the starting lineup with Walker out, said Wilson has been invaluable to his development.

"It's like having an answer sheet to the test," Harris said. "Anything I could wonder or anything I could ask about the defense, it's seldom he doesn't know the answer. ... If there's something iffy, and I've got to ask about something, we'll go have a separate meeting about it."

Wilson and the rest of Detroit's safeties figure to be put to the test this week against the Dallas Cowboys, who come to Detroit with an offense averaging a league-best 437.4 yards per game.

"I think it starts up front," Wilson said. "They have a very good offensive line and it starts with those guys up front, with a good running back, as well. If you get those things going in the same direction, the play-action opens up, obviously. We’ve got a tough task. We’ve got to make sure we don’t let this run game get going."