Matt Schoch keys in on five things to keep an eye on when the Lions take on the Vikings Sunday (1 p.m. Fox/760).

Justin Rogers and John Niyo do their best to talk about the Lions' upcoming matchup in Minnesota. The Detroit News

Hey, if the Lions are allowed to mail in the end of the season, then we are too.

Let’s get right to it.

Are some or all or any of Austin Bryant, Amani Oruwariyre and Will Harris future cornerstones for the Lions?

It’s hard to say, but it’s maybe the best hope they’ve got to drastically improve next season. 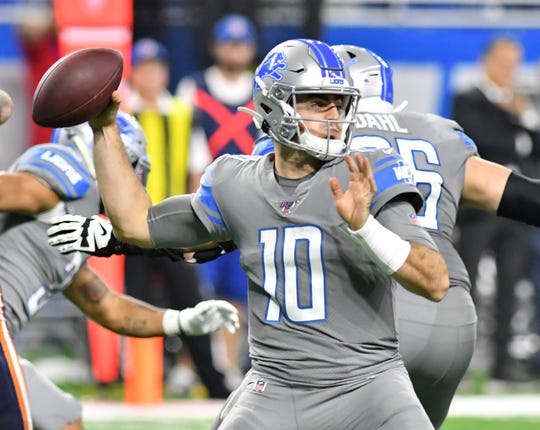 They’ll have every opportunity to prove their worth the rest of the season, so buckle up.

Bryant, in particular, will be interesting to watch over these last four games. There's some upside there.

The Lions have a couple of chances to play spoiler over these next few games (spoiler alert: They won’t.)

Sunday against the Vikings and Week 17 against Green Bay are games that Detroit fans can have some hope that at least rival fan bases could experience pain.

So Lions fans have that going for them.

Have you heard that David Blough does magic tricks? He pulled one last week against Chicago, making himself look like an NFL starter, despite the loss to the Bears.

Perhaps Sunday, Blough will come back down to earth, or maybe this is the start of a new headlining act…

That damn horn that the Vikings play when they do good things at home is the worst.

Not only are you watching the Lions get beat again, but you have to that damn Vikings horn over and over again.

The truth of the matter is it benefits the Lions to lose on Sunday, improving their draft position.

So, for once, you can smile when you hear that hideous horn.

When your team sucks, you should just gamble. It’s science.

According to Adam Thompson of bookies.com, the 13-point spread is the biggest for the Lions this season, with 7 being the previous high.

While Detroit has lost eight of nine games, the average margin of defeat is just 5.8, and only one of the setbacks was by more than seven points.