Allen Park — Da'Shawn Hand's disappointing, injury-riddled season is over.  For the second consecutive season, the Detroit Lions defensive tackle will finish the year on injured reserve. 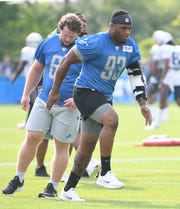 After a promising rookie season, there was high hopes for the 2018 fourth-round draft pick, but an elbow injury suffered in the first week of training camp sidelined him for more than two months, costing him the first six games of the regular season.

Two weeks after returning, Hand sprained his ankle, shutting him down another three weeks, and a setback proved to be season-ending.

He finishes his season with six tackles in three games. He played just 110 snaps.

To fill the roster spot, the team promoted wide receiver Travis Fulgham off the practice squad. A sixth-round pick out of Old Dominion this year, he caught seven passes for 147 yards during the preseason, but a late-game fumble likely contributed to him being cut prior to the start of the regular season.

"For Travis, it’s been a work in progress for him to continue to get better each and every day," Lions offensive coordinator Darrell Bevell said earlier this week. "There are still things that he does need to continuing to improve on, as any young rookie does, but sometimes the only way to do some of those things is to get your opportunity.

"We’ll see if that ends up shaking out this week or not," Bevell continued. "But, he’s been here every day. He’s worked hard. He works on both scout teams all day. He runs all day, so he’s in good shape that way. I’m sure if he was to get the chance, he’d be real excited about it."