Lions running back Bo Scarbrough sat out Thursday's practice with a rib injury.

Allen Park — There aren't many things going well for the Detroit Lions down the stretch, but the team has seemed to find a good thing in running back Bo Scarbrough.

But after sitting out Thursday's practice with a rib injury, the Lions might not even have Scarbrough for Sunday's game against the Tampa Bay Buccaneers. 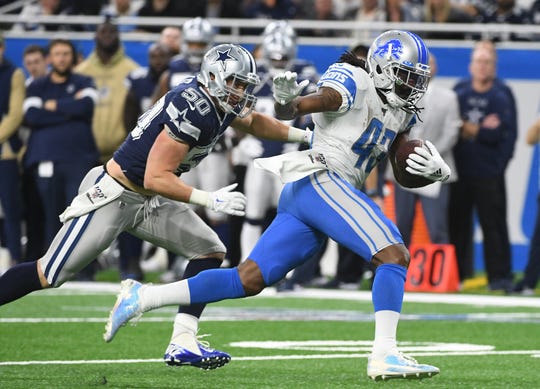 Scarbrough suffered a rib injury in the second half of last weekend's game against Minnesota. In four games since being promoted off Detroit's practice squad, he's rushed for 301 yards and a touchdown on 72 carries.

If Scarbrough can't go Sunday against the Bucs, the Lions likely will lean heavily on the backfield tandem of Ty Johnson and J.D. McKissic. It's also possible the team promotes Wes Hills off the practice squad to provide depth.