Bo Scarbrough and Kerryon Johnson have been orbiting in the same spheres for the better part of a decade.

Allen Park — The Iron Bowl? How about the Iron Backfield?

Bo Scarbrough and Kerryon Johnson have been orbiting in the same spheres for the better part of a decade, first as top high-school prospects from the state of Alabama, before moving on to key contributors on the opposite sides of one of college football's fiercest rivalries.

Now the two share a locker room and a common vision, forming one of the NFL's better backfield tandems. 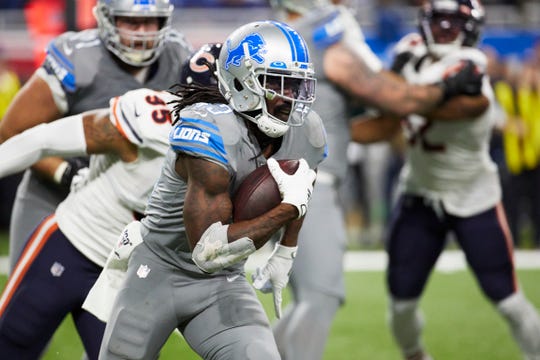 "And I think if you just keep pounding the ball and pounding and pounding, then, by the fourth quarter, the defense starts to wear out."

In high school, Scarbrough was the bigger deal. A five-star recruit out of Tuscaloosa, he committed to staying in town and playing for the University of Alabama. Johnson, a four-star prospect from two hours north in Martin, landed at Auburn.

But in college, Johnson became the hotter commodity. And when the two each declared for the draft a year early, Johnson was selected in the second round by the Detroit Lions, while Scarbrough fell to the Dallas Cowboys in the seventh round.

Another knee injury sidelined Johnson again in 2019, paving a path for Scarbrough to make his NFL debut a few weeks later in Detroit. And he's made the most of the opportunity, racking up 301 yards and averaging 4.2 yards per carry in four starts.

Although the two have yet to share the field, they're both clearly dreaming about what can be.

"It's hard for defenses to prepare for two different running backs," Johnson said. "We go through it on the weekly basis. This week, it will be the same for our defense, preparing for Peyton (Barber) and Ronald (Jones). It's hard for defenses to do that. They have to do certain personnel for this guy, certain personnel for that guy. ... Then they get tired and we're able to stay fresh. You do that for a whole season and it really helps benefit the whole team."

More: Here are Lions' top 10 building blocks for the future

The best recent example of a power back successfully pairing with a slasher was in New Orleans, where Alvin Kamara and Mark Ingram averaged more than 2,700 yards from scrimmage the past two seasons.

The Lions, of course, have struggled to put together a competent ground game since Barry Sanders retired twenty years ago. The team will have to wait until both Johnson and Scarbrough are healthy before they can determine if they've finally stumbled upon a winning combination.

Scarbrough didn't practice on Thursday or Friday this week after suffering a rib injury and is listed as questionable for Sunday's game against Tampa Bay. Johnson, on the other hand, is eligible to be activated off injured reserve as soon as next week, opening the possibility of a sneak peek when the Lions travel to Denver to play the Broncos. 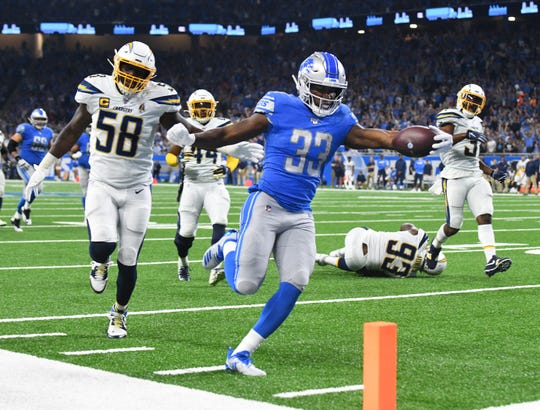 "I thought he had a really good day for us in practice (on Thursday)," Lions coach Matt Patricia said. "I thought he ran hard. You know, I’m on him just to make sure he gets his conditioning and all that stuff. He hasn’t played football in a while, but I liked his energy. I liked where he was at yesterday in practice. I thought it was a really good spot."

Johnson, who had surgery to repair a torn meniscus in November, said there have been no setbacks in his recovery. And even though the 3-9-1 Lions have seemingly nothing left to play for as a team, returning to action before the year of the year is important to the second-year back.

"I did all this work in the offseason, all this work in the summer, and I didn't do it to play five games," Johnson said. "Obviously, my goal every year is to play a full season. Two seasons down, I'm 0-2. Getting to seven, six, whatever it may be, it's better than where I'm at now. I just like to play. I like to be out there these guys. I'd like for these guys to see me play and be able to count on me. That's just what I love to do. "

And to fans who would like to see Johnson shut down and his health preserved, he said that's not the way he's wired.

"This is my job," Johnson said. "Fans don't determine what I do. I love them, but they don't really have any input on what I do. They don't have to go through my life on a daily basis. If I don't go out there and perform, somebody else might come out and perform and fans will be fans of that guy."

In addition to Scarbrough being banged up, the Lions have ruled out five starters for Sunday's game, including two offensive linemen.

If Scarbrough is unable to go, the Lions could potentially look to add Wes Hills off the practice squad to flesh out the depleted depth chart at running back.