Ford family has no intention of selling Lions, not considering offers

The Ford family has no intention of selling the team now or in the future.

Ford family has no intention of selling Lions, not considering offers

There's not much left to say after seven straight losses, but Justin Rogers and John Niyo try their best after Sunday's 38-17 defeat. The Detroit News

Allen Park — No, Amazon founder Jeff Bezos isn't in discussions to buy the Detroit Lions. Despite a rumor circling the internet on Tuesday, the Ford family has no intention of selling the team now or in the future.

In a meeting with reporters Tuesday, Lions owner Martha Ford, vice chair and daughter Sheila Ford Hamp, and team president Rod Wood, outside interest in the franchise, not specific to Bezos, was confirmed. Despite the inquiries, Ford has never given serious consideration to parting with the franchise her husband William Clay Ford purchased in 1963. 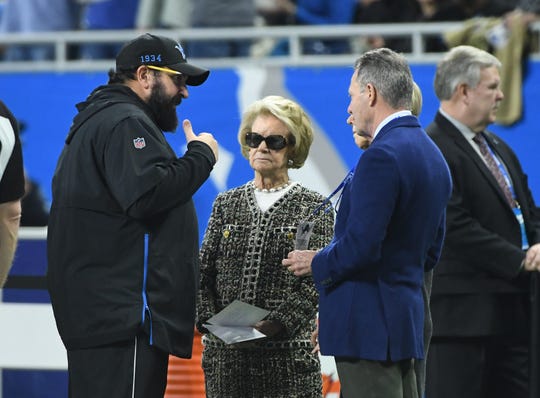 "We’ve been approached about interest in buying the team, but there’s been no serious discussions and the Ford Family plans to own the team and there's (succession) plans in place," Wood said.

Asked for clarification on the succession plan, Wood and Ford declined to provide additional details. The four Ford children hold equal vice chair titles within the organization, but Sheila has had a greater hands-on role with the franchise in recent years, including serving on the NFL's Super Bowl and Major Events committee.

The Ford family is a popular source of frustration with some Lions fans, who draw a direct link between ownership and the team's stretch of more than six decades without a championship.

On Sunday, a local apparel company, looking to take advantage of those frustrations during the team's current seven-game losing streak, showed up at Ford Field with a large banner reading "Sell the team" accompanied by a silhouette of Ford's face. 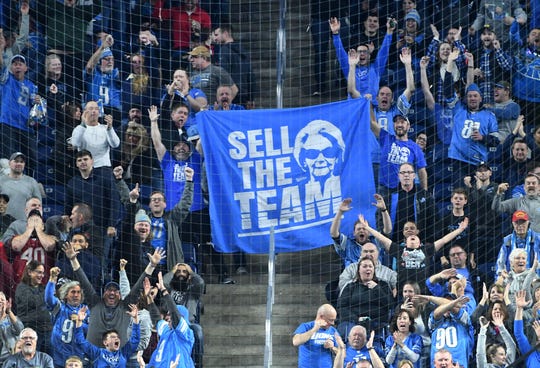 A banner with Lions owner Martha Ford's likeness with the words 'Sell The Team' is unveiled during a missed Tampa Bay field goal attempt in the fourth quarter. (Photo: Daniel Mears, Detroit News)

That angst likely helped the Bezos story get legs, as it was picked up by multiple media outlets on Tuesday after longtime local broadcaster Eli Zaret started the rumor on his "No Filter Sports" podcast.

"One step removed from the actual source, but the step is a friend who I trust totally and tells me to make this prediction. In 2020, Jeff Bezos will buy the Lions," Zaret said. "He has been here at least twice under the dark of night to have serious conversations."

Wood debunked the rumor, saying he's only met Bezos once, unrelated to a potential sale, at a local event.