On menu of 10 first-rounders, options are tantalizing for Lions

Depending on where they finish, the Lions could be picking anywhere from No. 2 to No. 11.

On menu of 10 first-rounders, options are tantalizing for Lions

Allen Park — The Detroit Lions are currently scheduled to select No. 5 in the first round of next year's NFL Draft, and depending on the results of the next two weeks, they could end up picking as high as No. 2 or as low as No. 11.

As the season nears the finish line, and the range of selection narrows, we thought it was a good time to introduce you to 10 possible prospects the Lions could snag with their pick. (Click here to see the gallery.)

Young remains the dream choice for Detroit, and just about any other team not in desperate need of a quarterback. The Buckeyes edge defender has put together one of the most dominant pass-rushing seasons in recent memory.

Despite missing two games and being sat in the second half of a few more blowouts, he tallied 16.5 sacks and more than 50 quarterback pressures. Pair that with Trey Flowers and Detroit suddenly has one of the league’s more formidable edge tandems. 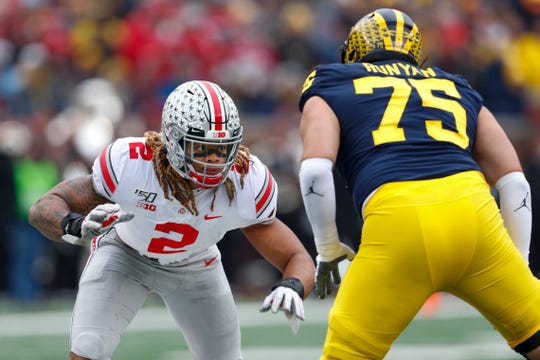 Brown could bolster the interior of Detroit’s defensive line, similar to what Young would bring on the edge. Extraordinarily powerful, Brown has tallied nearly 50 stops, with better than one out of five coming behind the line of scrimmage.

Impressively, he hasn’t missed a single tackle during his senior season. Add that to some juice as a pass-rusher, with 4.5 sacks and more than 30 pressures, and you have the makings of a complete defensive tackle who would pair nicely with Damon Harrison and Da’Shawn Hand.

Cornerback figures to be an area of need, and doubly so if the Lions opt to part ways with three-time Pro Bowler Darius Slay. Whether it’s as a replacement or a pairing, Okudah is the best prospect in this class.

Putting questions about his ball skills to rest with three interceptions this season, he also allowed fewer than half of the throws his direction to be completed. If the Lions don’t overhaul the defensive scheme, Okudah excels in man coverage thanks to quick feet and fluid hips.

The defense is in bigger need of a makeover, but protecting quarterback Matthew Stafford and improving the run blocking remain high-level priorities. Thomas has a prototypical frame with impressive quickness and power.

Whether he starts at right tackle or the Lions would consider moving Taylor Decker to the right side to plug the rookie in as the long-term blindside solution, it would be an upgrade.

The next-best edge option after Young, Epenesa offers teams a bigger frame on the outside. At 280 pounds, he moves exceptionally well, and has always proved problematic to stop on the rush, winning more than 20 percent of the snaps during his time with the Hawkeyes, while tallying 29 tackles behind the line the past two seasons. Given his ability to set a dominant edge, he actually might be a better scheme fit than Young. 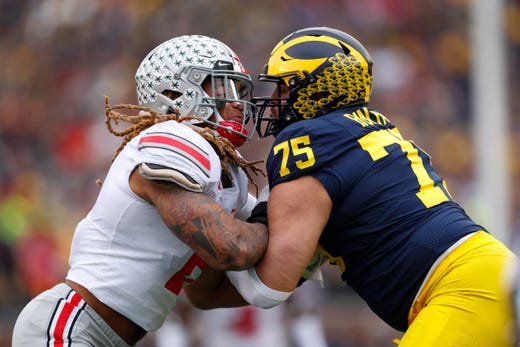 The Detroit News' Justin Rogers weighs possible selections for Detroit Lions, who will pick somewhere between No. 2 and No. 11 in the draft. Paul Sancya, AP
Fullscreen 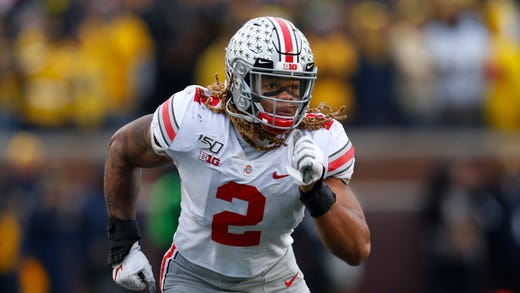 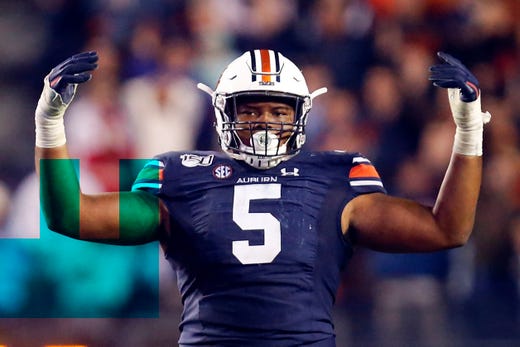 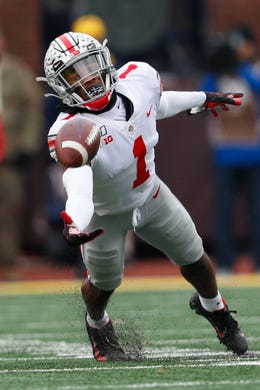 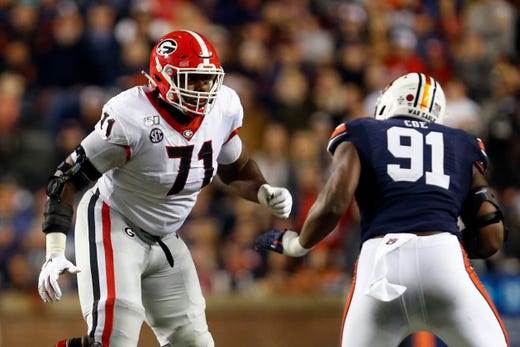 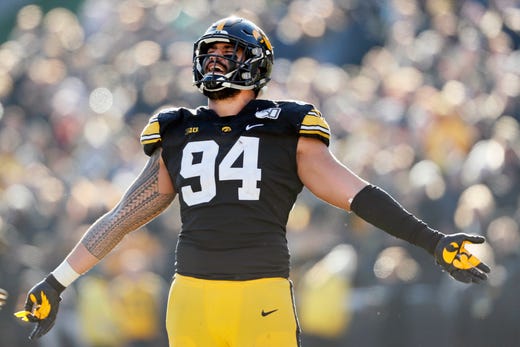 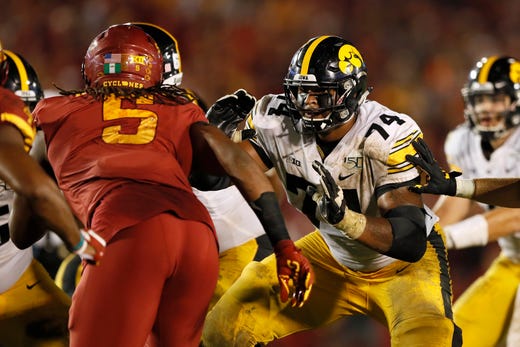 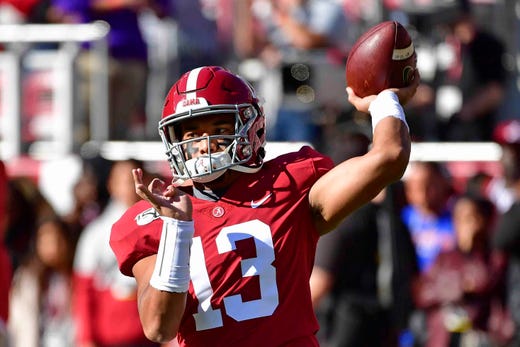 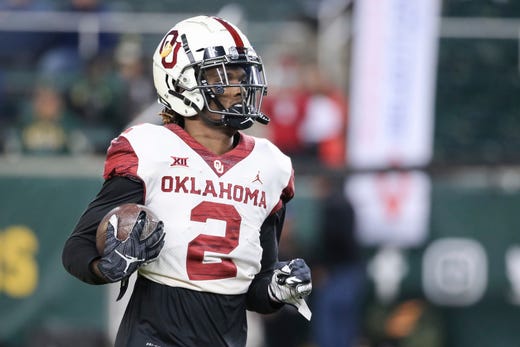 Remember when the Lions selected wide receivers in the first round four times in five years? How could you forget? For the most part, that didn’t work out too well, except for the last one, where the team scored six-time Pro Bowler Calvin Johnson.

The Lions certainly don’t have an immediate need at the position, but the long-term view comes into play in 2021, when both Marvin Jones and Kenny Golladay’s contracts are set to expire. Jeudy is nearly a perfect prospect at the position, with masterful route running and elite long speed. He’s up to 23 touchdowns over the past two seasons.

And here’s the kicker. He has plenty of experience playing in the slot, meaning it will be easy to put him on the field right away. With Golladay, Jones and last year’s first-round pick T.J. Hockenson, the Lions’ passing attack should border on unstoppable with Jeudy added to the mix.

Because of the school’s coaching staff and schemes, Iowa products are viewed as safe picks. But that decreased risk factor doesn’t diminish what Wirfs could bring to the table.

With freakish power and athleticism, he’s a plug-and-play option at right tackle. It’s also not unreasonable to think he could be converted to guard, similar to what Washington did with another former Iowa standout, Brandon Scherff, a few years back.

No one is quite sure what Simmons will be at the next level, but the right defensive mind will find a way to maximize the unique physical gifts. At 6-foot-4, 230 pounds, you can think of Simmons as a linebacker/safety hybrid.

Typically playing off the ball and on the outside edges of the offensive formation, Simmons has impressive coverage skills and good instincts addressing the run. In Detroit’s defense scheme, they could line him up in the box, trust him to cover tight ends one-on-one, aggressively play the run and occasionally blitz.

It’s difficult to imagine the Lions using this year's first-round pick on an heir for Matthew Stafford, especially given the win-now ultimatum being placed on the returning regime. Spending a top-10 choice on a longer-term plan might be the quickest way to ensure the 2020 season would be their last.

Prior to his injury, Stafford proved beyond a doubt he’s not the problem. But with serious back issues the past two years, there has to be increasing concerns about his short- and long-term durability.

Tagovailoa comes with his own concerns, as he works his way back from a significant, season-ending hip injury. If the medicals check out at the combine, the Lions might have a shot at a young quarterback with this much talent for quite some time.

Again, receiver isn’t the most pressing need, but if the Lions manage to win another game down the stretch, Lamb has to be in the conversation if we’re considering the best talent that could be on the board for Detroit.

Lamb is a big-play machine, averaging over 20 yards per catch this season, while scoring 26 touchdowns over the past two years. He has elite ball tracking skills and body control, while doing plenty of damage after catch.

Lamb doesn’t offer the same experience as Jeudy in the slot, but the Sooner standout has seen some work inside, enough that he could rotate through there with Detroit’s other receivers.