Wes Hills makes it to the Ford Field end zone twice after unlikely route to the NFL.

Allen Park — From Slippery Rock to a stepping stone.

Wes Hills’ climb from small-school long shot to the Ford Field end zone took a detour through the woods, which made the pre-game run through Detroit's tunnel even more meaningful.

“It brought a tear to my eye because looking back on everything I’ve been through. All the trials and tribulations, all the challenges, the adversity, to overcome it and be in that position, it made me take a step back and it was like, ‘Wow,’” Hills said this week. “Of course, the touchdowns help.” 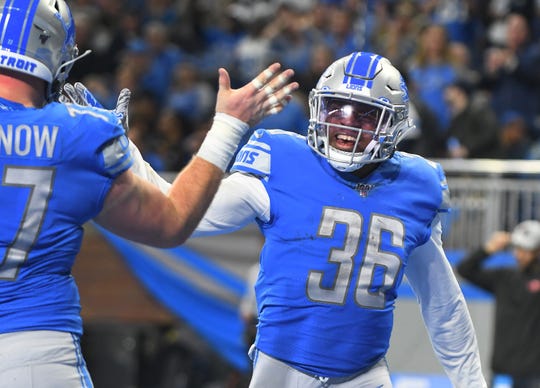 That’s right, if you had Wes Hills in your fantasy football starting lineup Sunday in the 38-17 loss to Tampa Bay, the rookie making his NFL debut could have helped carry you to a win.

The whole story is fantasy in its own right, but Hills believes it’s just the beginning of a longer tale.

“I would say it’s a stepping stone, but I have so much more to show,” Hills said. “That was only a glimpse of where I could really go.”

If that means more trips to the end zone, the Lions and 31 other teams should take notice.

The winding path to Detroit from his hometown of Wildwood, N.J., took him to Delaware as an unheralded recruit who had injuries slow an otherwise productive career.

But Hills was deemed academically ineligible for his final season at Delaware and became an overnight security guard during the 2017 season while weighing whether another shot at football was worth it.

It wouldn’t be the last time such a decision arose.

He went for it and eventually wound up at Division II Slippery Rock in western Pennsylvania.

But that’s when the second crossroads came, courtesy of an animal that came across his path on the way home to Wildwood to surprise his family with a visit as his final collegiate season neared.

Hills dodged the animal and his car went hydroplaning into the woods. His car was totaled but he was unscathed in the wreck. Hills, though, said it put the game into perspective.

“That actually kind of set me back a little bit,” Hills said. “I went back home for a while and just kind of rethought, sat back to see if football was something I really wanted to do. I didn’t know if that was a sign that I should stop playing or what. So I went back and was just around family, and it kind of refocused me and propelled me to this point.

“It was about being focused and locked in.” 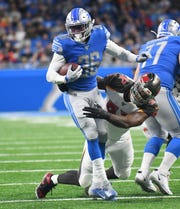 Wes Hills: “I play with a chip on my shoulder; that was my upbringing, that was my background.” (Photo: Daniel Mears, Detroit News)

Hills set a Slippery Rock single-season record with 1,714 yards rushing on a 7.0-yards-per-carry average, earning a spot in the NFLPA Collegiate Bowl.

An MVP performance there landed him in the Senior Bowl, though an injury that week damaged his draft prospects.

Undrafted, Hills landed with Arizona but reached an injury settlement with the Cardinals after training camp. He scored a touchdown in the preseason, and landed with the Lions' practice squad a month into the regular season.

He was on each side of Bob Quinn practice squad roster shuffles, as Hills said he was released and picked up four days later.

Throughout last week, indications were that Hills would suit up for his first NFL game.

“I just appreciate how hard he’s worked, how much he put into this, how much he’s improved. He’s just taken the coaching he’s learned, and he’s gotten better,” Lions coach Matt Patricia said. “I just appreciate the guys that come in and work really hard and try and improve. It doesn’t really matter where they come from or how they’ve come to us at that point.”

More: On menu of 10 first-rounders, options are tantalizing for Lions

Hills said he had trouble sleeping the night before the game and found out Sunday morning that not only was he active, but he was starting.

“It’s hard to wrap it all together,” Hills said. “It was a long journey. I was blessed with the opportunity man, and I tried to make the most of the opportunity.”

While Delaware’s NFL products are a small list, headlined by Joe Flacco and Rich Gannon, Slippery Rock’s is even slimmer.

When Hills scored in the third quarter from 1 yard out, he became the first Slippery Rock player to score an NFL touchdown since 1987. When he went in from 1 yard in the fourth, fumbling shortly after crossing the plane, Hills became the school’s all-time touchdown leader.

Slippery Rock now had three NFL touchdowns from alumni — with Pittsburgh’s Chuck Sanders scoring the only other one.

Hills finished with two touchdowns and 21 rushing yards on his 10 carries. 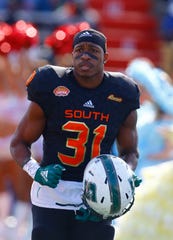 “I play with a chip on my shoulder; that was my upbringing, that was my background,” Hills said. “I went to a small high school, nobody recruited me. I was able to make something happen with that.”

This week, Hills allowed himself to think back to getting out of the car in the woods, how far he has come, and how he wants to stay on the right path.

“Not many people walk away from that,” Hills said. “To be here now is just like, that’s why that first game was so emotional, I had so many jitters.

“Made my family proud. It was important to me.”

With starter Kerryon Johnson possibly back in action the rest of the season and Hills’ roommate Bo Scarbrough working his way back to health, Hills could be back on the outside Sunday in Denver.

Looking ahead, a steady, prominent spot on Detroit’s 53-man roster is still unlikely, maybe as unlikely as a long playoff run for the Lions next season in his coach’s third year.

But Hills believes in both possibilities.

“We have a great team, we have a great coaching staff and higher-ups to really put together a team to really surprise everybody. We’ll show glimpses of that in the upcoming weeks, and that offseason is going to be big,” Hills said. “We’ll definitely be sure to make Detroit fans feel proud.

“You never know what the future will hold. But I’m definitely happy here and definitely want to play my whole career here if I can.”