When Bob Quinn addressed the media earlier this week, he said he didn’t anticipate an unusually drastic overhaul to the Lions’ roster this offseason.

Allen Park – When Bob Quinn addressed the media earlier this week, he said he didn’t anticipate an unusually drastic overhaul to the Lions’ roster this offseason.

The general manager instead offered up the usual: About 1 in 4 players on the 53-man roster will be shuffled up as Quinn looks to deal coach Matt Patricia a winning hand. 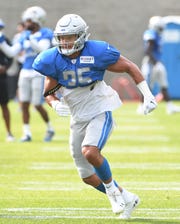 So looking around the locker room as the Lions said their goodbyes Monday, it’s not hard to pick out some of the most likely candidates to be part of the exiting 25-percenters.

The easiest to oust are the unrestricted free agents, free to sign with any team in the league. Although coming off a 3-12-1 season and some cursed by injuries and the passage of time, many might find their market values are less than when they arrived in Allen Park.

There’s just shy of 20 unrestricted free agents coming off Quinn’s ledger, with some certainly having a chance at a return to the Honolulu blue.

But there’s no certainty now for guys who could have a number of suitors on the open market, like guard Graham Glasgow and defensive tackle A’Shawn Robinson, could be weighing retirement like long snapper Don Muhlbach, or could be just trying to hold on somewhere around the league.

When asked Monday about the future and past, all queried said they would remember their times in Detroit fondly: Cornerback Rashaan Melvin was inspired by the city of Detroit’s revitalization, linebacker/safety Miles Killebrew said he loves the Lions fans, and offensive lineman Kenny Wiggins was surprised about the outdoor options he was able to enjoy in the Great Lakes State.

"It was very, I would say, a pleasant surprise of Detroit and how I viewed it,” said Wiggins, who said he’d welcome a return to the Lions. “My wife ended up liking it, coming from southern California, so it was a definite change of pace, but it was good.”

Wiggins has versatility on the plus side of his ledger, but a recent bicep tear he has to rehab on the negative side.

"Never been an unrestricted free agent being injured, so that’s doing to be a whole new thing,” said Wiggins, who came to Detroit as a free agent from the Los Angeles Chargers. “Just kind of take a couple weeks, then get back to work.

Unlike Wiggins and Melvin, players such as Robinson, Killebrew and punter Sam Martin will hit free agency for the first time.

"I felt like I was able to contribute where the team needed me,” Killebrew said. “Even though the record wasn’t where I wanted it to be, it was a lot of fun going out there and competing with my brothers.”

Killebrew was a valuable special teams contributor, but never grew into a defensive regular, shifting from safety and linebacker in his time.

For a specialist like Martin, things are a little different in a position where limited jobs are available across the NFL.

The punter finished his seventh season in Detroit, handling kickoffs once again, but took a pay cut before the year started.

The raw stats of 45.3 yards per punt aren’t great, but his net average was more middle-of-the-pack.

"I went through a lot of ups and downs in my time here and definitely grew as a man,” said Martin, a fifth-round pick in 2013 out of Appalachian State. “Whether I’m here or not next year, that’s something I’ll hold with me forever. Seven years here, it’s been amazing.”

Robinson has been steady for the Lions, if not spectacular. He said Monday that free agency and his future plans have not yet entered his mind.

Of the 22 players on expiring deals last season, only Muhlbach, defensive end Romeo Okwara and linebacker Steve Longa played for Detroit this season.

Whatever the future holds for players like Melvin, to a man, they said Monday was a time of happy memories of the Motor City.

"Just to see the fans still be diehard fans and being able to get out in the community and help the youth out was special to me,” he said. “Coming here showed me a different side of things and I was glad I was able to give back to the community.”