With Darius Slay recently turning 29 years old and set to enter the final year of his contract, the Lions figure to be in the market for a corner this offseason.

When it comes to the No. 3 pick in the upcoming NFL Draft, there are only a handful of options being projected to the Lions as analysts release their latest wave of mock drafts. The most popular choice has been Ohio State cornerback Jeffrey Okudah, who picked up another vote from ESPN's Mel Kiper Jr., who released his first mock Friday morning.

"This pick has to be on defense, right?" Kiper writers (the complete mock draft is HERE, under a paywall). "After the Lions spent a boatload of money in free agency last year on pass-rusher Trey Flowers and corner Justin Coleman, I thought they might take a step up. That didn't happen in a disappointing season, as Matt Patricia's defense gave up the NFL's most passing yards per game (284.4) and had the second-fewest sacks (28). Combine that with a half-season from Matthew Stafford and you get 3-12-1, and now Patricia is facing a make-or-break Year 3 in Detroit. 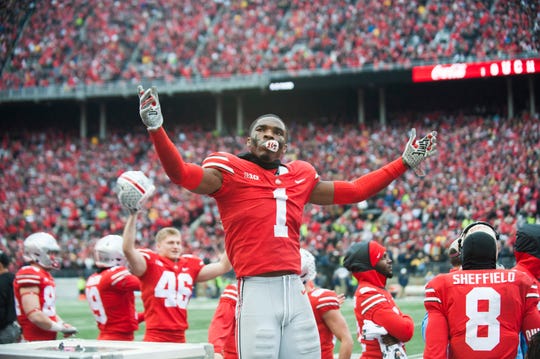 "Okudah, the top corner in this class, reminds me a little bit of Stephon Gilmore, whom Patricia coached for a season in New England. The Buckeye is also a stellar tackler off the edge. With Young off the board, Okudah is the top defender available."

With Darius Slay recently turning 29 years old and set to enter the final year of his contract, as well as no sure option opposite him on the roster, the Lions figure to be in the market for a corner this offseason.

Okudah would bring the prototypical combination of size, skill and production to Detroit. Listed at 6-foot-1, 190 pounds, he silenced concerns about his ability to produce turnovers last season, intercepting three passes.

Beyond the picks, he only allowed just 21 completions on 45 targets for the season, netting a paltry 220 yards.

Cornerback is a premium position in the NFL, with 16 players at the position owning contracts that average over $10 million per season. But it remains rare for corners to be drafted as highly as No. 3.

The past two selected in the top-five, Denzel Ward to Cleveland in 2018 and Jalen Ramsey to Jacksonville in 2016, both quickly developed into Pro Bowlers. The last time a team used a top-three pick to take a cornerback was 1997, when the Seattle Seahawks took another Ohio State alum, Shawn Springs.