Darius Slay is available, but an extension is also still on the table, says Lions general manager Bob Quinn. The Detroit News

Indianapolis — Detroit Lions general manager Bob Quinn once again made it clear he's not shopping quarterback Matthew Stafford, but when it comes to Pro Bowl cornerback Darius Slay, all options remain on the table.

Speaking to reporters at the NFL scouting combine on Tuesday, Quinn continued to emphatically deny the team has had any trade conversations regarding Stafford, contrary to a WDIV report published earlier this month. 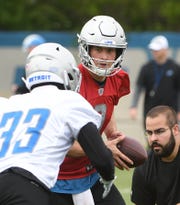 "In terms of the whole rumor on Stafford, I think I texted a lot of people here, that's 100-percent false," Quinn said. "If I need to add a third exclamation point, I will. I don't know where that came from."

Quinn said he phoned Stafford shortly after the initial report ran, making sure to directly confront the rumor with his quarterback and preemptively quell any concerns. In doing so, Quinn also confirmed Stafford's commitment the Lions.

"When the story came out, I called Matthew," Quinn said. "I said, 'Listen, I haven't had one conversation. I'm not trading you. Period. He was great. He was like, 'Yeah, I don't want to go anywhere.'"

Any rumblings about trading Stafford have been centered around two things. First, he has finished the past two seasons with an injured back, including missing the final eight games this past season.

Quinn reiterated the team doesn't have any long-term concerns with Stafford's durability.

Second, the Lions hold the No. 3 pick in the draft and are presumably in a position where they could draft an heir apparent at the position, such as Alabama's Tua Tagovailoa.

With two months before he needs to decide, Quinn continues to leave the possibility of using the team's first-round pick on a quarterback on the table. But his commitment to Stafford, not just in 2020, but beyond, in addition to the team's need to produce immediately for Quinn to maintain his job in Detroit beyond next season, logically dismiss the selection of Tagovailoa.

Stafford's contract runs through the 2022 season and Quinn says the goal remains for the quarterback to play out the entirety of the deal. That said, the evaluation process never stops. Asked if there would be a clear indicator of when it was time to add a replacement option to the roster, Quinn couldn't put a time frame on it, but implied the Lions aren't there with Stafford yet.

"The one thing about Matthew, his No. 1 trait is still the same as when I came here four and half years ago — he still has that great arm strength," Quinn said. "He's a competitor, he's tough, he's sneaky athletic. I think he's improved his athleticism a little bit over his career. He does a great job taking care of his body. You take all those things into consideration, like any other player." 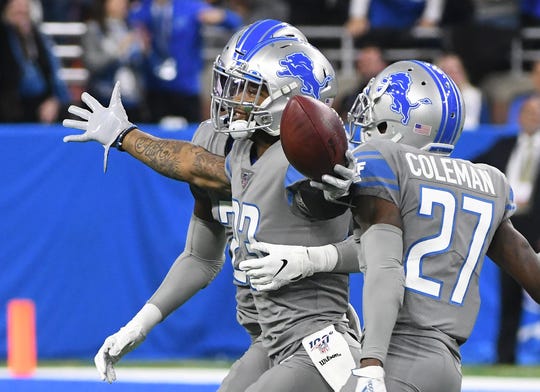 While all signs point to Stafford remaining in his role for the foreseeable future, the situation with Slay remains far more up in the air. Quinn openly acknowledged that all options remain in play for the three-time Pro Bowl corner, from a trade to signing an extension to doing nothing and letting him play out the final year of his current contract.

"I know there's a lot of stuff out there," Quinn said. "I think what we're trying to do is we're trying to explore a trade. That's not saying we're definitely trading him. We've had some conversations with other teams. Nothing to report right now. I think we're very much in the information gathering phase of this. Those conversations, from here on out, will be private between us, the teams, the representatives for Darius and Darius himself. That's kind of where it's at."

Quinn emphasized there's no timetable with Slay. The general manager said there could be a resolution next week, next month or not at all. Lions coach Matt Patricia chimed in to emphasize moving Slay is not the franchise's goal.

Quinn declined to comment on what kind of package he was looking for in trade talks.