A breakdown of Lions' deal with Collins, based on reported numbers

Collins will reportedly receive a $7 million signing bonus and have base salaries of $4 million, $8.8 million and $9.8 million over the next three seasons

A breakdown of Lions' deal with Collins, based on reported numbers

Allen Park — Contract information for free-agent agreements made on Monday and Tuesday can't be filed with the league until after the paperwork is signed later this week, but sometimes basic parameters of a deal will leak, often via a player's agent.

That appears to be the case with Jamie Collins' three-year, $30 million agreement with the Detroit Lions. According to Sports Illustrated, Collins will receive a $7 million signing bonus and have base salaries of $4 million, $8.8 million and $9.8 million over the next three seasons. There are also $200,000 workout bonuses built into the deal for both the 2020 and 2021 season. 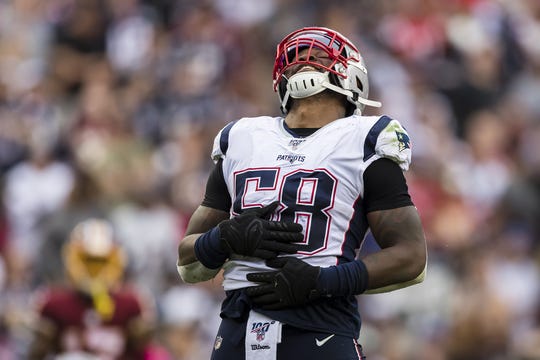 The pact effectively includes $18 million in guarantees. That includes the signing bonus, Collins' 2020 base salary and $7 million of his 2021 salary.

Breaking it down from a cap perspective is simple with this particular deal. First, the signing bonus is divided by the length of the contract and applied evenly for cap purposes. That $7 million, over three years, counts $2.33 million against the cap each season.

Given the deal is front-loaded, like the majority of multi-year NFL contracts, the Lions will be able to get out of it prior to the final season with minimal cap consequences. If the Lions were to cut Collins from the roster before the 2022 campaign, they'd be on the hook for just the $2.33 million prorated portion of the signing bonus.

By that point, given the steadily rising salary cap — which is in line to get another boost from upcoming TV contract negotiations and the recently ratified update to the collective bargaining agreement — $2.33 million should represent approximately 1 percent of a team's total cap figure in 2022.