A former first-round pick and Pro Bowler, Trufant has spent his entire seven-year career with the Falcons.

Allen Park — The Detroit Lions were busy on the third day of free agency, agreeing to terms with a new defensive tackle and trading for safety early in the day.

But the team saved its biggest move for the evening, agreeing to a two-year deal for cornerback Desmond Trufant, according to multiple reports.

According to ESPN, the deal is worth $21 million, with $14 million guaranteed. Texts to Trufant's agent seeking confirmation were not immediately returned. 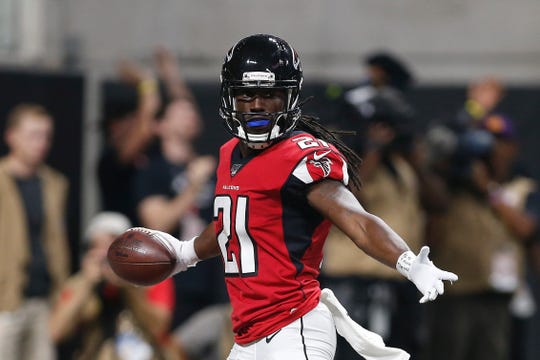 A former first-round pick and Pro Bowler (2015), Trufant has spent his entire seven-year career with the Atlanta Falcons. He's coming off an injury-shortened season where he missed time for a toe injury and broken forearm, limiting him to nine games.

Despite the abbreviated year, Trufant managed to pick off a career-high four passes, bringing his seven-season total to 13. He's also managed to break up 79 passes in 97 games, all starts.

According to Pro Football Focus, the 6-foot, 190-pounder allowed 23 completions on 34 passes his direction in 2019 for a total of 390 yards and five touchdowns.

For the time being, he's projected to line up opposite Darius Slay, completing a talent-rich secondary following the addition of veteran safety Duron Harmon in a trade with the Patriots earlier Wednesday.

But the Lions continue to explore the trade market for Slay following the first wave of free agency. He's entering the final year of his contract and is seeking an extension that is expected to make him the position's highest-paid player by annual average value.

After the Trufant agreement was reported, Slay tweeted out his expectation to be traded.

Congrats to my guy!!!! Hope that speeds up my trade process!! https://t.co/ZQHO3NCGuE

If a deal gets done to ship out Slay, it would solidify the case for Ohio State cornerback Jeff Okudah to be Detroit's top target in the first round of next month's draft.