Lions coach Matt Patricia and his team have spent much of the last week engaged in some frank discussions about race.

Lions coach Matt Patricia and his team have spent much of the last week engaged in some frank discussions about race, amid the protests and calls for justice in Detroit and cities across the country following the Memorial Day killing of George Floyd by a Minneapolis police officer.

And late Wednesday afternoon, the team released a statement underscoring that point, stressing “a responsibility to create positive change” and vowing to build on the team’s ongoing social justice initiatives locally. 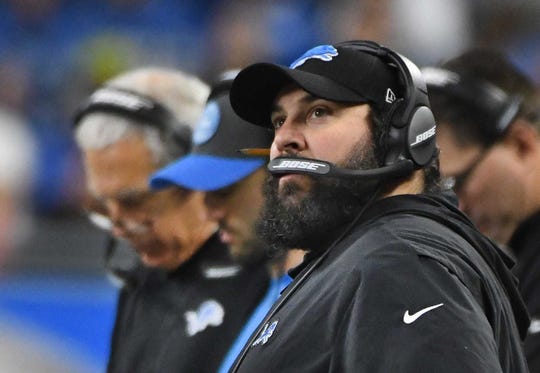 “Right is right and wrong is wrong,” the Lions’ statement read in part. “What is happening is not acceptable. We recognize that the deaths of George Floyd, Breonna Taylor and Ahmaud Arbery are only the most recent examples plaguing our communities.

“Our club vows to expand on the work already being done in the Detroit community – through real action and conversation – to help our team make an impact in areas of great need. We have a duty to lead these conversations now and always, but it is equally if not more important that we continue to LISTEN. The events over the past week are a hurtful reminder that we have a long way to go with inclusion, diversity and equality for all people. We have a responsibility to create positive change.”

Patricia, entering his third season as the Lions’ head coach, said in an interview with Sports Illustrated he first saw the video of Floyd’s death on Thursday night.

“Honestly, I was just disgusted, angry, sad, depressed,” Patricia said. “The range of emotion, you watch the video, someone being murdered and you’re like … I didn’t even know how to process it.”

And after addressing it during a team meeting the next day, Patricia said that conversation among coaches and players continued early this week. Instead of beginning Phase III of the team’s virtual offseason program, the Lions spent several hours Monday and Tuesday in full-team and position-group video conferences sharing their own thoughts and experiences on a variety of issues related to the ongoing unrest in this country.

“It was just about listening and making sure we tried to get on and open it up for conversation – real conversation, truthful conversation, honest conversation, heartfelt conversation,” Patricia said. “And really, honestly, credit to my players for leading that. They’re the ones that really were able to get it to where it became so powerful.”

Wednesday was an off-day for the team, but virtual classroom sessions are scheduled to resume Thursday. Lions players also are expected to take part in a weekly media session with reporters this week as well.

“When everyone’s ready to talk and move in that direction of football, we’ll move when the team wants to move,” Patricia said. “I think the one thing to understand there – we won’t move away from the conversation.”

Many of the Lions’ players have weighed in with social-media posts in recent days. But team officials hadn’t made any public comment until Wednesday, when Lions vice chairman Bill Ford Jr., speaking as executive chairman of Ford Motor Co., joined other area business leaders at an event with Mayor Mike Duggan downtown.

“Our community can’t thrive if all members can’t participate in its progress and if some are excluded and targeted because of the color of their skin,” Ford said. “There are no easy answers, and we aren’t interested in superficial actions. This is our moment to lead and work together to effect real, lasting change.”

As for how this all might change the dynamics of the Lions’ locker room, Patricia told SI it’ll be an ongoing educational process for everyone.

“I think for us, what we hope, and how we gotta hold each other accountable, is to make sure that we are continuing the conversation, and we are setting up time to do that,” Patricia said. “And we’re trying to come up with ideas to follow through outside our building to have the conversation. It’s amazing when you get a group of men together, and you start to listen, and you get to the point where you feel comfortable talking through it.

“And listening to some thoughts and ideas, I think that’s when you gotta make sure you follow through. You gotta try. And they’re not all gonna work. But if a couple of them work, and you make change, you connect. … We gotta try, and we gotta stick with it and we gotta persevere through that. We talk a lot about leadership and the team driving that leadership. And I think that’s important for us to make sure that it’s an everyday thing.”

In the wake of league-wide player protests against racial injustice during the 2017 season – including several Lions who took a knee during the national anthem before games – team owner Martha Firestone Ford agreed to partner with players in launching a “Detroit Lions Inspire Change” initiative 18 months ago. An initial pledge of $600,000 was directed toward scholarship funding, social education and health assistance programs in the city.

A message from the Detroit Lions pic.twitter.com/wEWSt5IG8p