Lions to re-open facilities to limited number of employees Wednesday

The Lions will re-open their headquarters in Allen Park and offices at Ford Field to a limited number of employees next Wednesday.

Lions to re-open facilities to limited number of employees Wednesday

The Lions will re-open their headquarters in Allen Park and offices at Ford Field to a limited number of employees Wednesday, the team announced today.

But the Lions’ offseason program for coaches and players will continue to operate in a virtual classroom mode, as it has since late-April following the closure of all NFL team facilities in March due to COVID-19 restrictions. 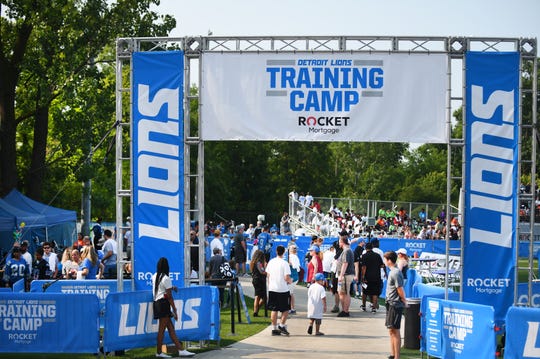 While some employees will return next week, Lions players will continue their offseason program in a virtual classroom mode. (Photo: Daniel Mears, The Detroit News)

“Our staff across all departments have worked diligently while remote and we are appreciative of our hard-working employees,” the team said in a statement. “Several committees have been preparing for this phased approach to resume our operation to ensure employee safety is the priority.”

On May 19, the NFL began allowing teams to reopen facilities to a limited number of non-field employees, in accordance with various state and local guidelines. That didn’t include coaches or players, except for those receiving medical treatment. A second phase allowed clubs to open ticket offices and retail shops on June 1.

NFL commissioner Roger Goodell sent a memo to teams Thursday notifying them that coaches now will be permitted to return to facilities beginning Friday, with a maximum of 100 employees allowed in those buildings at a time.

The Lions, who are only beginning Phase 1 of their return-to-work protocol, aren’t there yet, though Gov. Gretchen Whitmer's most recent executive order allows outdoor "athletic practices, training sessions, or games" to resume with social-distancing restrictions and other safety protocols in place.

But the Lions won’t lose any significant competitive advantage, as all NFL teams will continue to work virtually with players through at least June 12. And it’s likely to stay that way in the NFL through the scheduled end of the offseason on June 26. Players aren’t expected to be allowed back at team facilities across the league until the start of training camp in late July.

The NFL also has notified teams this week they will be required to hold camps at their respective facilities this summer “to limit exposure risks” and cannot conduct practices with other teams, per an agreement reached through a joint task force with the NFL Players Association.

That means the Lions won’t hold joint practices this preseason for the first time since 2015. Last year, the team held a total of five days of joint workouts with New England and Houston prior to their first two preseason games, and likely would’ve done the same this year with the Patriots in Foxborough ahead of their Aug. 13 exhibition opener.