If 'opportunity' knocks for Colin Kaepernick, don't bet on Lions

The Lions aren’t in the market for a quarterback. But that won’t stop them – or any team – from having to answer questions about Colin Kaepernick.

If 'opportunity' knocks for Colin Kaepernick, don't bet on Lions

Lions offensive coordinator Darrell Bevell met with the media in a Zoom call on Wednesday. The Detroit News

The Lions aren’t in the market for a quarterback.

But that won’t stop them – or any team – from having to answer questions again about whether they might have interest in signing former 49ers starter Colin Kaepernick, who hasn’t played in the NFL since 2016 when he started kneeling during the national anthem before games to protest police brutality and racial injustice. 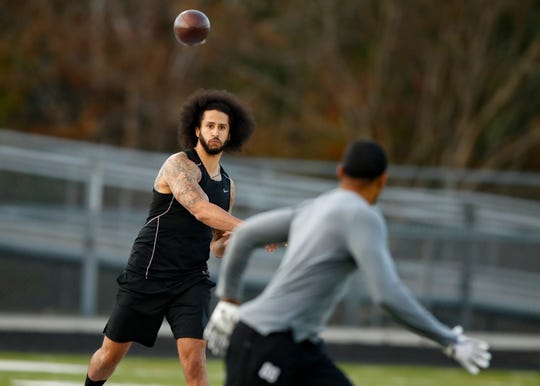 The recent social unrest sparked by the killing of George Floyd has cast Kaepernick’s protests – and the controversy that followed as other players joined him – in a new light. This week alone, both NFL commissioner Roger Goodell and President Donald Trump – a vocal critic of the protests during the anthem -- have publicly endorsed the idea of Kaepernick signing with a team as a free agent.

"Well, listen, if he wants to resume his career in the NFL, then obviously it's going to take a team to make that decision," Goodell told ESPN. "But I welcome that, support a club making that decision and encourage them to do that.”

More: Niyo: Lions' Darrell Bevell confident his offense will be 'advantage' this season

Asked by a Sinclair correspondent on Wednesday whether he thought Kaepernick deserved another shot in the NFL, Trump said, “If he deserves it, he should. If he has the playing ability."

Seahawks coach Pete Caroll told reporters last week that he knew of one team that was “interested” in possibly bringing in Kaepernick. And Chargers coach Anthony Lynn went a step further, telling ESPN the 32-year-old Kaepernick “definitely fits” his team’s system and “it would be crazy not to have him on your workout list.”

Lions offensive coordinator Darrell Bevell was asked Wednesday whether his team had any plans to bring in Kaepernick for a workout, but he deferred to general manager Bob Quinn and head coach Matt Patricia.

“That’s probably a better question for Bob and Coach,” Bevell said. “As far as I know, no. But that’s still a little bit down the road.”

Asked what he thought it would take for Kaepernick to return to the NFL, Bevell added, “I think the easiest answer is an opportunity. Somebody’s got to give him an opportunity to get back in and see where his skill-set is at. Just from what I’ve read and what I’ve learned, he’s stayed working out, he’s been doing all those things, feels prepared to do that. So I think that’s the biggest thing – he just needs an opportunity.”

The Lions are heavily invested in their longtime starter, Matthew Stafford, and signed free agent Chase Daniel, a 12th-year pro, to a three-year, $13 million contract back in March. David Blough, who started five games as an undrafted rookie last season when Stafford was sidelined by a back injury, remains on the roster as a developmental third-string option.

Daniel has started only five games over his NFL career, but his lone start last season with Chicago was a win over the Lions on Thanksgiving.

“I really like the addition of Chase,” Bevell said. “He’s done a great job of seamlessly transitioning into that quarterback room. I think there’s already a great camaraderie in the room. … Just the knowledge that Chase has, the things that he’s seen, the experience that he’s had on the field … I think just having another set of eyes for Matthew that can talk different things through, whether It’s protection or it’s a progression or when you come off to the sideline, having that veteran presence that can kind of nudge him or talk to him or speak to him in a different way than probably I would there on the sideline, I think that’s something that he can bring.

“And then obviously you need a guy that can step in, in the event that something happens, and still be able to play at a high level. He has shown that he can do that, that he can lead a team, he can win games. I’m eager to get with him on the field.”