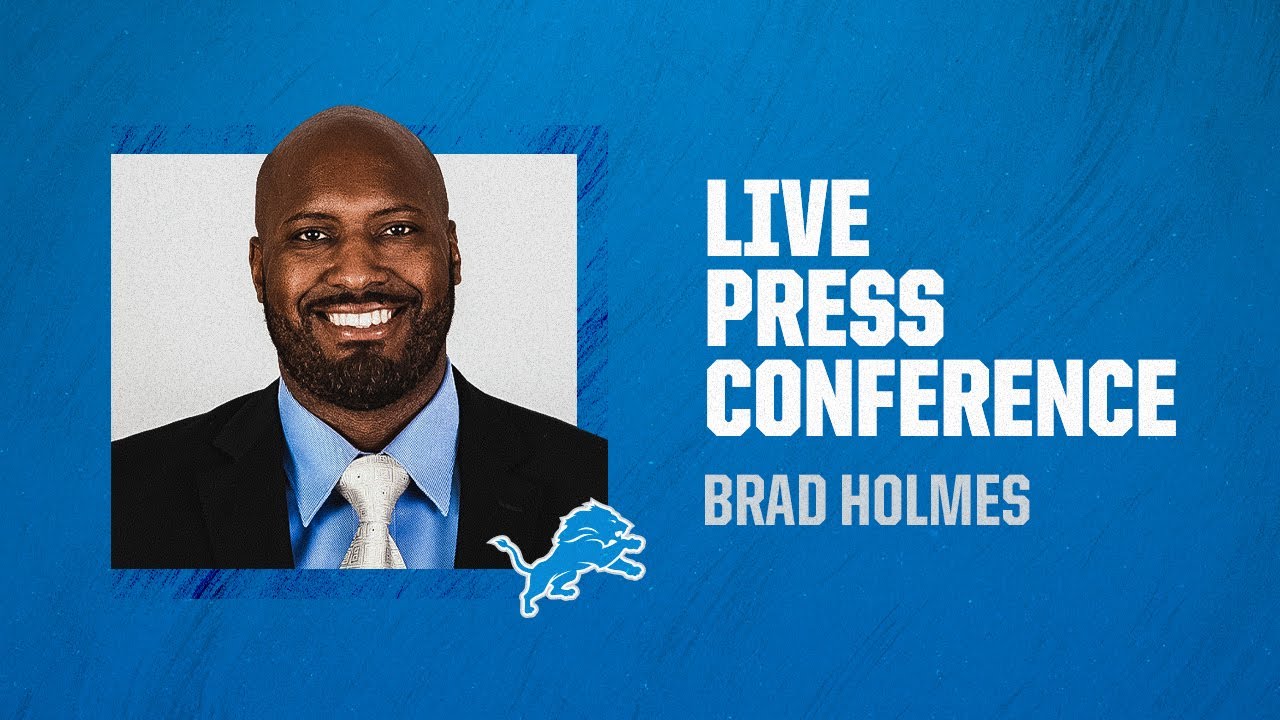 Holmes on his first steps as GM

"Once the head coach is on-board, I want to make sure that we sit down, and I'm in direct alignment ... of what his philosophy, and what his vision is."

Holmes says that "it is the head coach's vision. He's the voice of the team."

Holmes adds that he wants to aid the head coach to make sure his systems and philosophies "are running at an elite level."

Holmes says that Sean McVay pursued and signed a few players that weren't popular names at the time, but he believed in their fit with the team, and they ultimately proved to be difference-makers.

Holmes ends his press conference by shouting "One pride!"

Holmes on what he's looking for in a head coach

"I never had a preference" of offensive or defensive candidates, systems, etc.

"My number one core trait is that he's gotta be a leader of men, and he's got to have presence ... poise ... confidence ... command ... mental toughness ... stress tolerance."

Holmes says that because he comes from a college scouting background, he looks forward to building through the draft, and wants to make sure that his coaches have a strong passion for developing drafted players.

Holmes said that his father, who played for the Steelers in the 60's and 70's, taught him a lot about the racial tension at the time, and the backlash that he faced for being in the league as a black American.

Holmes says that he hopes he can become a hero for young black kids across America, the same way that he had heroes that proved he could reach his own dreams.

"I'm very much appreciative ... that they opened up their search to a diverse field of candidates."

Holmes says that in his first decade with the Rams, he was able to get a handle on how every department worked.

"I got a really good appreciation and understanding of how everything operated from a football operations standpoint."

Holmes said he feels confident in the experience he has working with many different types of people.

On how he can rebuild the Lions' defense

"Please don't get mad at me if I don't use the word rebuild," Holmes says.

Holmes says that the hiring of Sean McVay changed the culture to, "We, not me."

"I would definitely tell all Lions fans ... let's all trust the process that's going to be in place. It will be a sound, thorough and diligent process. We're going to surrender those results to the process."

Holmes says that he likes to leave intuition to the end.

He adds that he was educated on the fanbase by a family member.

Holmes on his approach to bringing All-Pro talent to Detroit

Holmes starts by reiterating how important intangibles are.

"Let's invest in reliable players. Obviously, we're not overlooking talent ... but I truly believe that the separator of success are the players that do have high-intangible traits."

"That same approach will definitely be carried over to Detroit."

Holmes says that this was his first "interview circuit."

"The pinch-me moment" was when he came back in the building for his second interview. Holmes once came to Allen Park for an interview in the Lions' public relations department, making the experience of returning as a GM candidate very surreal.

Holmes says that in eighth grade, he skipped school to watch the NFL Draft.

"That moment, I became enamored with the process of scouting," Holmes says.

Holmes says that as a teenager, he told one of his friends that he knew he'd definitely get into scouting. But once in that role, he never looked ahead as to what's next, "because I was always so laser-focused on what the job at hand was."

Holmes said that a lot of his experience with the Rams is in making bold moves.

He says that bold processes yield bold results. "You can surrender your results to that process."

Holmes: "There's not one specific item or area that has to be changed right now ... if we stay disciplined in the approach to that process, we should get the results."

Holmes on things he can carry over from the Rams, and processes he'll have to start over

Holmes says that "the advantageous part of what my role is, and what our process has been with the Rams ... is that I'm very well-versed in the college draft for this draft class."

Holmes adds that his knowledge of this year's draft class was something he felt gave him an inside edge on the job.

Holmes adds that their evaluation process is a "very dynamic, process-driven approach."

Holmes on what the true status of the organization is

"I think when you get into the offseason, I think every franchise, every team, will look at the areas where they need some retooling ... and some areas that need to be addressed."

Holmes adds that the ultimate goal is to make sure the on-field product in 2021 is as competitive as possible.

On intangibles and how they impact decisions

Holmes said that with the Rams, they always made a point of pursuing "high-intangible football players."

Holmes adds that "passion for football is of the utmost importance when it comes to intangibles ... That's just something I won't budge on."

On if he'll supplement his knowledge with other experts

Holmes says that at his old job, they were referred to "as a basketball team," because they all made decisions together on all fronts.

"I think it's very important that we have a blended staff with experience."

On technology in scouting

"Technology is an accelerator," Holmes says.

Holmes says that he enjoys using technology in communication, scouting, coaching, and a whole lot more.

"That's something the Rams used heavily ... that opened my eyes."

On Matthew Stafford and his standing in the org

"Great player. What you really appreciate is ... how his intangibles show in film. Just how urgent he plays, how competitive he is, the toughness that it show. But it is my job to evaluate the entire roster. Through that process, I have not had any discussions with Matt or any player for that matter. I just want to be fair to the process and make sure we evaluate that further."

Holmes says that evaluation of the total roster is extremely important, and is something he and the new head coach will attack when that hire is made.

Holmes on his vision for the Lions

"It's not complicated ... it will be through a collaborative approach. We will build a winning and inspired culture to serve the best football product to this great city of Detroit, so we can compete for championships on a consistent basis."

"I stress the word serve," Holmes says, stressing that GM truly is "a serving role."

Holmes said Spielman was so helpful during the pre-interview process, he thought it was a set-up. Holmes adds that Spielman really embraces the role as a servant, and that he truly wants to help the organization.

Holmes starts by saying that he didn't know what to expect going in, was nervous.

"In that first interview, the nerves quickly went away." Holmes says that Ford Hamp blew him away.

"It was like sitting by a campfire, just getting to know each other ... sometimes it just feels right."

On what gives Ford Hamp the most faith in the decision

Ford Hamp says that she's confident in the hire because the process was extremely thorough.

"We made sure everything was covered that we wanted to be covered ... and the fact that there were four of us, and two real football people, in on this interview process ... I think that's what gives me the confidence."

Ford Hamp: "We kind of decided we didn't want to have (both the GM and coach) be complete rookies."

Ford Hamp says that Holmes wasn't on the initial list of candidates, but Mike Disner came across an interview of Holmes, showed Wood, and Wood said, "Oh, my gosh. We've got to interview this guy."

"He literally blew us all away ... Brad just struck us as head and shoulders above."

Wood adds that his first impression of Holmes was "this is the guy."

On whether Holmes had any say on the coaching search

Ford Hamp says that the hiring interviews were done simultaneously. She says that in every interview they asked each GM candidate if they had a preference for the coaching hire.

Wood adds, "When the coach is announced, it will be with Brad's awareness and support."

Wood says that Holmes and the new head coach will work together on building the roster.

"Both (Vice president of football operations Mike Disner), Brad and our new head coach will report directly to Sheila and me."

Ford Hamp said that she opened each interview by describing Chris Spielman's role, "a servant. He'll help Brad, he'll help the new coach, Brad and me, the whole organization. He's part of the team."

The new structure is a slight tweak, as the head coach and Disner were reporting to Bob Quinn.

Wood said his favorite pitch about draft and roster-building analysis. was "the use of analytics to really hone in on the players that you predict will fit on your roster and fit on your team."

Wood and Ford Hamp both echo the sentiment that Holmes' approach is "cutting edge."

Ford Hamp: "There's the intuitive part of it, too, and he's got that as well."

Ford Hamp on her first impressions of Holmes

"When we finished with Brad ... all I said was 'Wow. Just wow.' He was everything we were looking for."

"Culture-builder, engaging, the ability to lead a diverse team ... someone with excellent self-awareness, acknowledging what they don't know."

Wood adds that all referrals they spoke to spoke glowingly about Holmes.

Lions owner Sheila Ford Hamp is the first to speak.

"The whole process was extremely thorough and comprehensive." Ford Hamp says that everybody was involved with the process and debriefed after each meeting.

"Beyond that, we were looking for a natural leader, an engaging communicator, and someone that can help us lead a culture shift."

Ford Hamp says she interviewed 12 GM candidates, but when they interviewed Holmes, "he stood out as the perfect fit."

"His embrace of the fusion of analytics and scouting intuition, as it pertains to drafting, blew us away. He was our unanimous choice."

The Detroit Lions on Tuesday are introducing new general manager Brad Holmes to the media.

Holmes has a whole lot on his plate, with no issue bigger than what to do with quarterback Matthew Stafford. Reporters will try to get to the bottom of his plans, and his philosophies, and his head coach — expected to be Dan Campbell, with an announcement coming as early as Wednesday.

The News' Nolan Bianchi will provide live updates and analysis from the presser, starting at 4 p.m. Tuesday.