Dave Semenko, the Oilers tough guy who protected Wayne Gretzky during the 1980s, has died. He was 59. 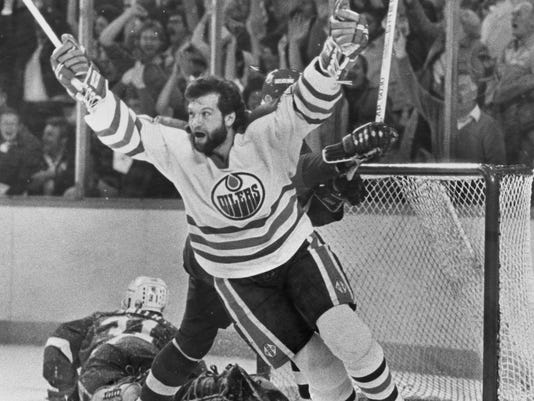 Edmonton, Alberta — Dave Semenko, the Oilers tough guy who protected Wayne Gretzky during the 1980s, has died. He was 59.

He died in Edmonton after a short battle with cancer, the team said Thursday.

“His legendary toughness on the ice is surpassed only by his kindness and caring for others, and his equally legendary wit and sense of humor,” the Oilers said in a statement.

Semenko was the bodyguard for “The Great One” for parts of 10 seasons with the Oilers in the World Hockey Association and NHL.

In an era where hulking enforcers roamed the ice alongside the league’s top stars, Semenko was one of the toughest.

And he had plenty of competition, often going toe-to-toe with the likes of former Red Wing Bob Probert, Basil McRae and Tim Hunter, who served a similar role for the rival Flames.

Semenko spent the bulk of his career with the Oilers, finishing with Hartford and Toronto.

“I loved Semenk like we all did,” said Hall of Famer Mark Messier, a longtime teammate. “He was a great teammate, a loyal friend, a loving father and a worthy champion.”

The Rangers made their deal with former Red Wings defenseman Brendan Smith official.

Smith, who was traded to the Rangers at the March trade deadline for second- and third-round draft picks, signed a $17 million, four-year deal.

Agent Anton Thun confirmed there is some no-trade protection for Smith all four years.

Hartnell, who becomes an unrestricted free agent, had 13 goals and 24 assists in 78 games for Columbus.

... The Oilers placed forward Benoit Pouliot on unconditional waivers with the purposes of buying out his contract.

Pouliot had two years left at a salary-cap hit of $4 million. By buying out Pouliot, Edmonton saves $2.67 million against the cap the next two years.